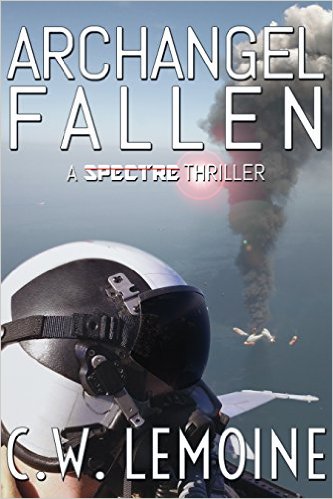 C. W. Lemoine’s Archangel Fallen is the third book in the Spectre series dealing with an international conspiracy. The thrilling adventures of Captain Cal “Spectre” Martin continue despite his yearning for a quiet and normal life. Dangerous and cruel people whose paths he had crossed and whose treacherous plans jeopardizing the US national security he had thwarted in the past don’t allow him to do so. While targeting Cal they threaten, kidnap, and kill his friends and protectors. Escaping his own kidnapping and assassination, Cal isn’t just running from the coldblooded killers. Being accused of some of these murders Cal becomes a wanted man. Both FBI and the local police are after him. However, his own life and reputation isn’t so important to Cal. Knowing that his closest friends are being killed because of him makes Cal broken, and yet the anger rises in him and unexpected circumstances push him to fight back.

Besides seeking revenge Cal is highly motivated by his suddenly realized deep feelings for FBI agent, Michelle Decker. On the way to clear his name and save her life Cal learns that along with Chinese some top level U.S. officials are involved in this espionage plot. Are there any people left around Cal that still can be trusted?

“…with all Spectre had been through in the last year, nothing really surprised him anymore.”

Although the events in this book follow the previous two, Archangel Fallen has its own solid and exciting plot. Being a fighter pilot Cal Martin successfully demonstrates his elevated direct combat skills. Things aren’t easy going for this blue-eyed, perfectly healthy, thirty-four-year-old fellow; his daylight life often resembles a nightmare. The intrigue is contemporary and the storyline is supported by references to many frightening current events. The imperfection of the book’s characters makes them believable, credible, and the story itself more realistic. It can be read separately, but readers would certainly enjoy this book more by starting with book one.