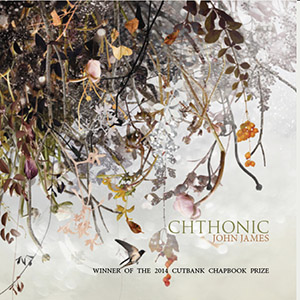 John James’s Chthonic, winner of the 2014 CutBank Chapbook Prize, is an earthy debut that renders the familiar unfamiliar and then familiar again. Between these pages we are led to sleep, to dream, to wake up changed. In “Driving Arizona,” James writes, “Home is a question and we’re drifting from it.” It is questions like these that burrow through these pages. A seeming reexamination of a life lived: what is home? What was true inside the silence of a family? What can we dredge up and call “real” of a life that drifts further into a shifting memory and makes less and less sense the more one tries to piece it together?

“Chthonic,” as I understand it, owes its etymology to the Ancient Greeks. In their mythology, something chthonian pertained to what was under the earth, particularly the deities and the spirits and such that dwelled there. James’s poems are earthy in themselves, filled with fields, barns, grass, and blood. These poems are not violent or forceful; neither are they pastoral, sentimental homages to a sense of place. They are excavations:

“I ask my mother
what she did with the light.
She says it’s
under the bed. I ask
my father why
he can’t hear. He tells
me he’s underground.”

Chthonic is a rending of the earth, an exploration for the sake of understanding all the unarticulated motivators that lay just beneath the surface of consciousness. James’s poems dig deep as he asks us to join him at the edge of his excavations, to see what he’s unearthed, and we can’t help but look until we see it too.