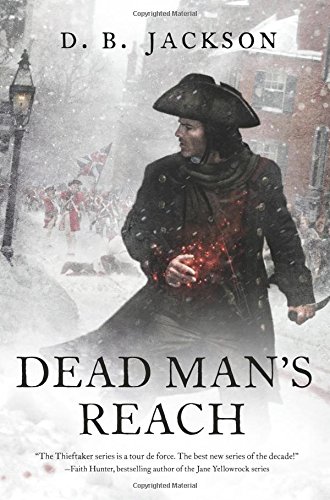 Dead Man’s Reach continues the story of Ethan Kaille, a conjurer living in Revolutionary Boston. In this volume a rival conjurer is attacking Boston and causing riots and civil unrest. Ethan attempts to find out who the mysterious man behind these disturbances is, fearing it is his mortal enemy, Nate Ramsey. Unlike earlier books in the Ethan Kaille series which, while connected by characters, were largely independent, this novel draws more heavily on the earlier volumes in the series. This latest book sees Ethan at a series of crossroads. Should he continue to shun Sam Adams and the Sons of liberty, even while more of his friends endorse their cause? How can he protect his girlfriend Kannice and her property? How can he continue to make a living as a thief taker, when more and more of Boston’s wealthy flee the city’s increasingly turbulent atmosphere?

Previous readers of this series will find a volume that is a match for the first books. Jackson always pays meticulous attention to his research and it shows in his evocation of 18th century Boston. The story proceeds at a breathless pace, and has all the action and adventure of previous volumes. Some readers may find this pace a little too breathless, as Jackson scrambles to tie up all of his loose ends and finish off his series, but committed readers will find this thoroughness satisfying.