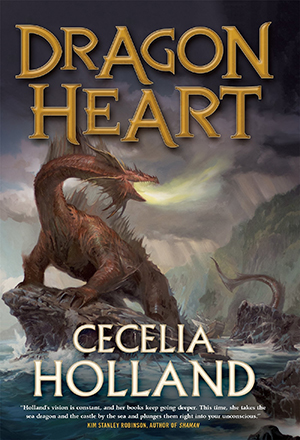 Tirza has been unable to communicate with anyone her entire life. When she talks her speech emerges as growls, squeaks, twitters, and howls. While returning home by sea, a dragon attacks her ship and she is accidentally kidnapped. To both her and the dragon’s surprise, they can understand each other. Tirza’s life continues solely on the dragon’s whim, and she must entertain him with stories or suffer his displeasure. A re-envisioning of One Thousand and One Nights, with a twist, this could have been a really interesting concept for a novel.

Unfortunately, that is not what Dragon Heart by Cecelia Holland is about. Most of Tirza’s interactions with the dragon happen within the first chapter, and then the dragon’s storyline dips in only rarely through the main narrative. The plot instead focuses on Tirza’s family, who according to legend are descended from a monster, and whose lineage seems to be both a power and a curse. They rule their corner of the world from a castle as unusual as they are, and also full of secrets. Their family has recently lost a war with a nearby empire, the king is dead, and the queen has signed a treaty forcing her to marry the emperor’s brother. What exactly the treaty states other than that she must marry one of the emperor’s brothers is never specified.

This storyline has its own potential, but fails to live up to it. It is founded on the very unlikely concept that the queen poisons the man sent to marry her, which does not seem a secret to anyone, and the emperor – a conqueror, a man of law, and a man of faith – responds by merely sending another brother, instead of, say, punishing the queen according to the law or responding with some sort of military force. One might assume that by killing her fiancé the queen would invalidate the treaty she signed, and that the treaty gave her kingdom some sort of autonomy or benefit, but none of this seems to be the case.

Aside from this shaky logic, the story might have been good, except that the characters are more archetypes than people, flat shapes that merely fulfill a role in the novel – like paper dolls. Any character development is stated and synopsized in description, rather than captured in dialog and action. This prevents the reader from emotionally connecting with the characters and distances the reader from the story. There is also a tendency for characters to shift suddenly, with no visible transition, to have another personality entirely.

Dragon Heart has some interesting concepts, and had a lot of potential, but needed to be developed more fully before it was released to the public.