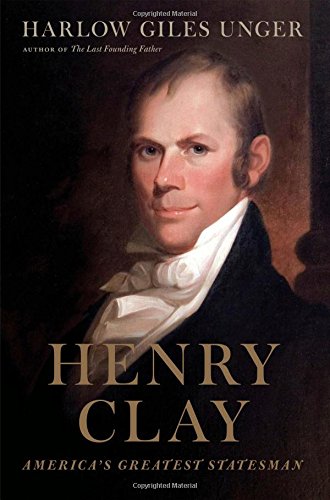 Henry Clay: America’s Greatest Statesman is a biography written by Harlow Giles Unger. Having previously written histories/biographies of the founding fathers this biography takes on Henry Clay, a man identified as an orator and statesman of the era before the Civil War. Having read Mr. Unger’s biography of John Marshall, which was thoroughly enjoyed, his reviewer had significant anticipation of this book. Unfortunately the subject of Henry Clay’s life was more difficult to animate and develop a continuous interest throughout the book.

Henry Clay was born in 1777 and died in 1852. His life fell between the Revolutionary War and the Civil War. He was trained in law, became a lawyer, and was regarded as an excellent and successful lawyer throughout his career. He was elected to the state assembly of Kentucky, which was followed with significant periods of time spent in the United States Senate and House of Representatives. Perhaps his most “famous” time in the federal system was as the Speaker of the House, which brought to the public his skills as an orator and debater as he established the position as one with significant power. Much of his political career was spent in the effort to prevent the fracture of the nation into a civil war. His effort and struggle was noted and admired by the younger Abraham Lincoln.

The biography is well researched and documented with extensive references. It is easy to read and follows the course of Henry Clay’s life and career. It provides background of the country and the problems that the nation faced during Henry’s life. While the documentation of the time expresses significant admiration of Clay’s oratory and mediation, it is difficult to appreciate as much of these occurred in debates and argument in the House and Senate. Flashes of the skill and wit are provided in short quotations: when a congressman protested the limitation on his time and stated “I speak to posterity!” Clay is reported to have said, “Yes and you seem resolved to continue speaking until the arrival of your audience.” The other problem with this book is the occasional, and at times inappropriate, insertion and assertion of the author’s opinion. For example: “Publicly he (Clay) called slavery ‘a deep stain…’ but privately he insisted that slaves were better off under his care – as indeed, they probably were.”

The book provides a deep and detailed understanding of the man, his family, career, and the world in which he lived. For individuals such as this reviewer with limited knowledge and understanding of Clay (he was a great orator) this biography was overall very informative and easy to read, if not the most riveting material.