No Yeti Yet by Mary Ann Fraser 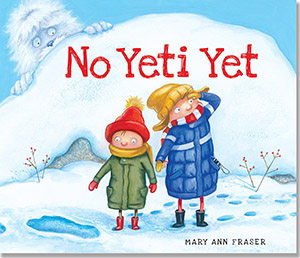 The nameless duo of kid brothers in No Yeti Yet is looking for, well, a yeti. The older brother seems to be the expert on yetis, despite never having seen one. In the way of older brothers, he’s keen to impart his knowledge to his wide-eyed younger brother. He says a yeti is big and strong, furry, has enormous feet…and he’s not sure if it’s friendly or not.

Fortunately, this book allows readers to spot the yeti first, and we see that it is, in fact, friendly, and just as playful and inquisitive as the kids. It’s a cute, gentle yeti: it is kind to birds, and it watches the brothers play in the snow with innocent curiosity. Kid readers can find the hidden yeti on each page, sometimes quite difficult to spot; the yeti makes for a fun “I spy” game for kids to play while reading.

The text in the book consists only of the dialogue between the brothers: the younger one’s questions, and the older one’s answers. The casual rhythm of the dialogue and subtle rhymes make this a fun book to read out loud, and the short sentences and simple vocabulary make it easy for very young kids to follow along with.

Although we, the readers, know that the yeti is just a big softie, there’s still almost a suspense to the book: the brothers keep narrowly missing the yeti a few steps behind him, and we wonder, will they ever see the yeti? Of course, they eventually do, and their yeti encounter demonstrates that appearances can be deceiving, and sometimes scary-looking creatures can be the most kind. It is the younger brother who ends up teaching the older brother this lesson, showing that little brothers – and crypto-zoological creatures – have wisdom to impart, too.