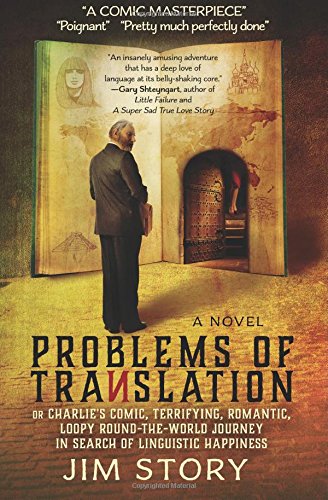 In Problems of Translation readers follow writer Charles Abel Baker as he tours the globe to follow up on an ambitious project. A lover of language, Charlie has an idea: to translate a short story into ten different languages, and then back into English. When a big name editor rejects his book idea, Charlie decides to see his idea come to life on his own. Little does he know that the editor decided to steal his idea, and has sent a hit man after him to make sure Charlie doesn’t succeed. Luckily, Charlie has his own guardian angel dogging his footsteps. What follows is a zany and surprisingly philosophical adventure as Charlie globetrots while pursuing his dream.

The pacing of the book is slow, but steady, and is certainly never boring. Charlie falls in and out of various adventures and life threatening situations as he visits Russia, China, India, and Mexico to name a few of his stops. He deals with missing cats, plane crashes, earthquakes, and other near misses. These adventurous sequences are interspersed with quieter scenes – discussions on translation philosophy with the various translators, introspective dreams, and musings of the meaning of life. While the sheer number of the philosophical introspection may slow the pace a bit too much on occasion, they are often laced with in-jokes that the linguist and classical book lover will find amusing.

The other part of the book follows the two ex-CIA agents sent to follow Charlie and the men behind them. These sequences let the reader take a step back to take a peek at the larger picture of what is going on, as well as letting readers see the humor in Charlie’s complete obliviousness. The irony of course being that in his pondering the deep, philosophical big picture, Charlie manages to miss the big picture of the world around him.

This is a complex book that touches on language, culture, and the human desire to search for connection and meaning in life. One part midlife crisis, one part old-timey spy film, and one part romance, Problems of Translation is a multilayered story that readers – particularly those who love book related humor – will enjoy.