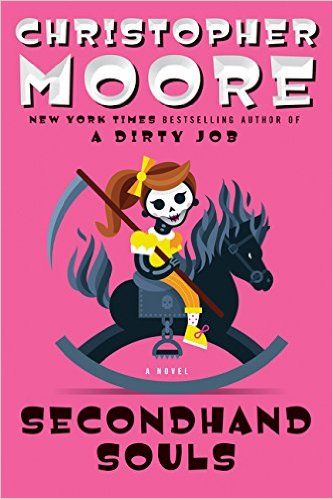 Christopher Moore loves San Francisco. That’s obvious in the way he includes the city as a virtual character in many of his novels. Secondhand Souls is one of those novels. His descriptions, however, are not typical of a traditional love story.

“The funeral was held at St. Mary’s Cathedral of San Francisco, which has the distinction of being the only church in the world designed after a washing-machine agitator.”

The novel carries on the story Moore began in A Dirty Job, published in 2006. As Charlie Asher talks to the long-running Minty Fresh, who first appeared in Moore’s Coyote Blue (1994), he reiterates:

“A dirty job,” Charlie said. “The Big Book says it’s a dirty job. I used to think that we were like Death’s middle management, but we’re not. We’re Death’s grunts.”

Asher and Fresh are Death Merchants. It’s their job to gather soul vessels, where souls of the recently deceased go while they await an opportunity for another life. These can be anything: an ashtray, a bottle of perfume, anything. When a soul is present, they exhibit a red glow, which only the Death Merchants can see. They take the vessels and keep them in their shops: a bookstore, a pawn shop, a vintage jazz record store, some eclectic place of business where customers can become part of the natural order and take the vessels home.

Secondhand Souls wraps its fast-paced adventure around the hierarchy of the Egyptian underworld, partnered with ancient Celtic legends. Together, they have upset the balance of the universe and it falls to the characters introduced in A Dirty Job to set things right. But things have changed. Charlie Asher, who met his demise at the end of A Dirty Job, is now living in a strange, small creature cobbled together by Audrey, his Buddhist nun girlfriend. He needs to find another human body, but how?

Minty Fresh, the seven-foot lover of all things jazz, realizes that things have changed and he must figure out how they’ve changed and how to deal with the problem. The power of the underworld is growing and he is forced to step out of his familiar routines. He has to reconnect with his former girlfriend, Lily, a goth girl who’s desperately looking for a way to be special. She used to work in Charlie Asher’s pawn shop and, after a disastrous partnership with Minty, now works at a suicide crisis line with hilarious results.

As the tale grows taut and the future of the universe looks grim, Christopher Moore still produces laughs as only he can do. And while the laughter ensues and the story careens through the city of San Francisco, we learn about the hierarchy of the underworld, Celtic goddesses of war, everyday life in The City, and what banshees actually do. Our imaginations are fully exercised.