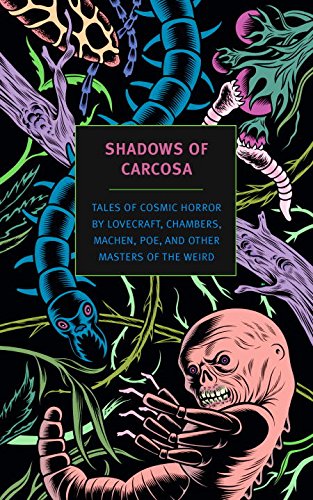 Shadows of Carcosa will best be enjoyed at night, in a dark house, with only a single reading lamp resisting the encroaching darkness. This collection is a reprint of a previous NYRB title under the name The Colour Out of Space, after the Lovecraft story it contains. Within the reader will find many of the classic short stories of the weird and supernatural, from master Poe to Lovecraft. A word of warning: these are not your typical horror stories. They are the standards upon which all trite horror stories are founded. They are not concerned with the actions of murderous beasts or the quick movement of action, but rather personal and intimate stories that create an atmosphere transporting the reader to another world – a strange world of the mind where all the known laws of the universe are called into question, a world where that gnawing emptiness in the pit of your stomach at the sight of something awful can thrive. Within this world is a creeping horror that is born in the darkest corner of your mind unbeknownst to you, ever growing until it consumes you – for it is not some horror that can be discarded easily, but an existential horror that lingers long after the book is replaced on the shelf. Reason has no place in this horror. As the Swede in Blackwood’s “The Willows” puts it: we “[stray]…into some region or some set of conditions where the risks [are] great, yet unintelligible to us,” at the border of some world that the human mind is not meant to know for fear of madness. This is where my literary tastes like to dwell, and if it is where your tastes reside too, then this collection is a must for any horror enthusiast.

The collection begins with a queer and overlooked Poe story, “MS. Found in a Bottle,” in which the unexplored South Pole promises inescapable destruction to the helpless narrator. It is followed by a delightful tale from Bram Stoker, of Dracula fame, with a singularly gruesome death of a tourist by the plotting of a death by a spiteful cat. Several tales by Ambrose Bierce next appear, with the first references to Carcosa, which the next writer, Robert W. Chambers, would expand upon in his classic collection, The King in Yellow, from which the next story in this collection comes. In “ The Repairer of Reputations,” a young Hildred Castaigne is driven slightly mad after reading the book, The King in Yellow, and becomes involved in a horrible plot of world domination that may be only a symptom of his lingering madness.

Stories by M.P. Shiel, Arthur Machen, Walter De La Mare, and Henry James all follow and are quite masterful in their own right, but the best story in the collection is from the great Algernon Blackwood. His “The Willows” has everything that a weird tale should have (and is cited as a personal favorite of Lovecraft). The narrator and his friend, the Swede, are on a canoe excursion along the Danube. They reach swampy waters with many small islands populated only by willow trees. Both spend a restless night feeling the willows and some other supernatural presence pressing in upon them and in the morning find the canoe has been sabotaged and an oar missing, leaving escape from the island impossible. At first there is suspicion that the companion is responsible, but these suspicions are soon discarded with the only remaining option becoming an unknowable and unbelievable option threatening their lives with a need of a “sacrifice.” Every paragraph serves a purpose in this story. We are lulled along the river with the protagonists, finding rational explanations for the mounting mysteries until the conclusion of something otherworldly can no longer be denied. The protagonists are left only with the knowledge of something ineffable, something that cannot be described or explained, but whose existence they must confirm – and we along with them if we rely on the narrator’s testimony. Here we find the true measure of a horror story as we suffer and fear along with the protagonists and are forced along the paths of doubt and madness with them, unable to escape the same harrowing conclusion: that the supernatural exists alongside our own mundane reality, ever threatening to destroy all that we as humans know and care for. Blackwood succeeds on every level and, as such, “the Willows” exists as the example of the weird tale par excellence.

The collection leaves off with Lovecraft’s “The Colour Out of Space,” which is also a classic of the weird and has influenced all that has followed it. It tells of the strange and deadly occurrences in the woods surrounding Arkham after a meteorite falls to Earth nearby. The meteorite appears to be made of some unknown, glowing metal that shrinks away until it disappears into nothing. Despite the meteor’s absence, or perhaps because of it, the vegetation begins to fade away, gaining an otherworldly hue akin to the meteorite’s. Then the people begin to grow mad – dangerously so. Lovecraft is a master of provoking the otherworldly, of making the otherworldly seem possible despite our better judgment. His prose is beautiful, though often cited as being a bit purple, antiquated, and erudite for some, but I think it lends to the flavor of the text, provoking a sense of authority as well as making the reader feel out-of-place (but not completely foreign) in his strange tales.

Ultimately, these works should not be considered genre trash (as some would label them), but rather as works of literature to be taken seriously (yet not too seriously). These writers are masters of the literary craft who have chosen to explore those dark, unknowable corners of the brain belonging to man – for the fear of the unknown is not just a burden of past mankind, but still lingers within each of us today no matter how much light our knowledge sheds. The weird tales such as those collected within Shadows of Carcosa brush against our assured, modern minds and return us to a primal state where we wonder as to what monsters lurk just out of sight and in the shadows. It is within these pages that modern man can encounter its past and collide once again with the unknown, reminding us that our place in the universe is not as solid as we believe it to be – that despite all our accomplishments, we may still be merely children playing with fire in the dark. The true horror story keeps us humble – for though we are the masters of the Earth now, one never knows what fate might befall mankind.