Sharky Marky and the Scavenger Hunt (An Alphabetic Adventure) by Lance Olsen, illustrated by Thomas Perry 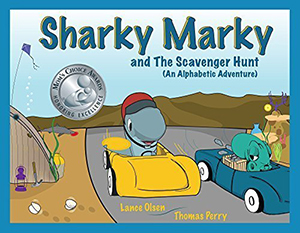 Sharky Marky and the Scavenger Hunt (An Alphabetic Adventure) is a children’s picture book by Lance Olsen and Thomas Perry. Sharky Marky follows the adventures of its protagonist (obviously:) Sharky Marky, and his race through a scavenger hunt through an ‘under the sea’ landscape. Obviously, the intention of the book is to take kids all the way through the alphabet, and bulk up their vocabulary.

The story itself is fairly straightforward, Marky is racing against other racers to gather all of the items on his scavenger hunt list – which is a fun way for kids to read back the words and keep up with the alphabet. There are some unusual items on the list for being in an ‘under the sea’ setting, but it could be argued that fish aren’t racing race cars down there, either. The illustrations are simple, though very cute, and Marky himself has friends and enemies such as a crabby looking octopus named Octo Eddy. Some of the cutest illustrations are Marky himself and the big orca whale, – appropriately named Killer whale Karl – who doesn’t look very killer at all. Despite the character illustrations being adorable, the backgrounds of the book could use a little work – they are empty and it almost looks like tumbleweeds will go rolling across them at any second. However, despite the poorly generated backgrounds, the story is interesting enough to keep a kid’s attention while not being too overbearing, and the character illustrations are colorful enough to make it enjoyable to look at. It’s nice that the front of the book could act as a coloring book for kids – and the back of it includes a list of definitions for all of the words encountered throughout Marky’s race underneath the sea. The book is definitely fun, and worth picking up!