The Case Against Satan by Ray Russell, Foreword by Laird Barron 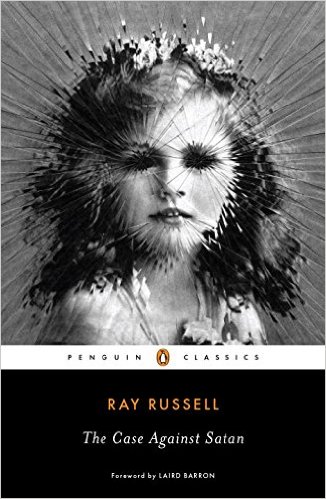 Doubt is the overwhelming feeling of Ray Russell’s The Case Against Satan. This classic 1962 novel of exorcism does not share the clean-cut theatricality of its descendants, like Blatty’s more well-known The Exorcist (1971), but relies instead on the subtle yet crippling doubt that racks the consciences of its characters. Russell expertly juxtaposes the supernatural tenets of the Catholic Church with the rising psychological and scientific interpretations of spiritual phenomena that were gaining ground at the time to create a morally ambiguous horror story concerning the supposed possession of a young girl, Susan Garth. Throughout the novel we wonder along with the main character, Father Gregory Sargent, whether the action of exorcism is right and proper, or an unwarranted and medieval torture levied upon an innocent, if mentally unstable, young girl. Tradition clashes with modernity. Which wins? Are we not still waiting for that answer even today?

Father Sargent is newly arrived and taking over the parish for Father Halloran, but Halloran urges Sargent to take special care of one member of his flock in particular, the young Susan Garth who has lately given herself over to vulgarity and fitful displays. Most notably, she stripped before Halloran and then proceeded to attack the priest, having finally to be physically restrained. As if on cue, right after Halloran departs, the girl and her father knock on the door of the rectory in search of advice. The practical Sargent advises the girl to visit a psychiatrist, but Mr. Garth will hear nothing of it, seeking instead the help of the clergy. Father Sargent promises to help as best he can.

When Susan returns the next day after a fight with her father, Sargent is in an interview with Bishop Crimmings, who has just been informed of Susan Garth’s situation. The bishop interviews the girl and, after a test wherein the girl’s skin is burned by the cross of his rosary, determines that she is possessed and in need of an exorcism. Father Sargent remains unconvinced, unable to brush from his mind more scientific and psychological explanations. Nevertheless, he consents to proceed with the exorcism, a process which tests his faith as well as that of all those involved and culminates in a spectacular revelation in which many see the hand of God explicitly at work.

While Sargent may become convinced by the end that the possession was legitimate, we readers are left with an even greater doubt than when we first began the tale. The clergy seems convinced by a number of signs, but, as the story unfolds, to the reader it seems rather more a matter of human foible and coincidence than an encounter with the supernatural. Thus we seem to take an inverse journey as compared to that of the protagonists. While Sargent grows from scientific skeptic to faithful believer, we grow from accepting the possession to doubting this spiritual interpretation altogether. Is the hand of God at work in the dramatic climax of the work, or is it just the consequence of vulgar human nature? There is no answer. Only doubt.

But what cannot be doubted is importance of Ray Russell’s novel. It was a predecessor of many famous fictions involving exorcisms, a subject all but forgotten at the time. This book began a sub-genre of literature and is arguably its finest example. It is a well-written and accessible work that is delightfully full of careful nuance, yet free from weighty judgments and pesky dogmatic diatribes. But, most of all, it is a fantastic horror story. Instead of watching The Exorcist for the umpteenth time this Halloween season, read this short but thought-provoking and dramatic novel instead. You will not regret it – though it may leave you doubting.