The Islanders by Pascal Garnier, translated by Emily Boyce 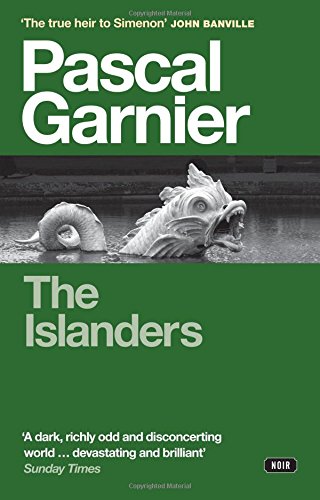 Love, death, and the absurd: these make up the belle macabre of French art. The Islanders is a twisted, sadistic, funny, clever, gritty, booze-soaked noir novel from the dark imagination of Pascal Garnier, translated into English by Emily Boyce.

The Islanders begins much in the same way as Albert Camus’s The Stranger. Instead of Mersault traveling to dreaded Algeria to attend his mother’s funeral, it’s Olivier who is traveling to dreaded provincial Versailles to attend his mother’s funeral. There, he accidentally reunites with the only person he’s ever loved, his high school sweetheart, Jeanne. She lives with her loud, obese, blind brother, Rodolphe, who is not content to be the third wheel and has a few tricks up his sleeve.

I don’t give a fuck whether you killed the kid or not, whether the tramp was innocent or not, what sticks in my mind is “Jeanne and Olivier,” like “Romeo and Juliet” or “Héloïse and Abélard.”

It’s a quick read and full of action, much like a play. There are few actors and sets, but much to catch the eye. If not a play, this would make an excellent smoke-hazed movie.

French noir is not like American whodunits, which focus on the mystery and surprise at the end. Instead, it is a descent into darkness and madness. Allusions throughout the book, such as the predominantly referenced painting The Raft of the Medusa, make this novel a dark, rich dessert.