The Rim of Morning: Two Tales of Cosmic Horror by William Sloane, Foreward by Stephen King 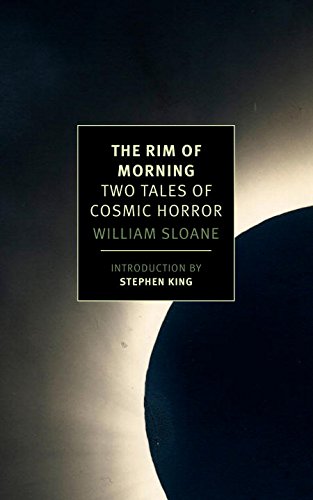 Carefully plotted literary horror is the meat and potatoes of my literary diet. The Rim of Morning, by William Sloane, was a filling meal after a long day in the trenches. The two novels within this collection (To Walk the Night and The Edge of Running Water) rest firmly alongside classics of the genre like Lovecraft’s At the Mountains of Madness, Chambers’s The King in Yellow, and Machen’s The Great God Pan. From the very first, I was hooked. The narrators at once relate the tale and doubt their sanity in doing so. This approach makes for the best of narrators in horror fiction, for they (along with us) must suspend their disbelief and better judgment to relay the story and, as a result, we readers more readily suspend our disbelief alongside them. The result is that we fear and suffer in parallel to the narrator – which is right where an author should want his or her audience. In The Rim of Morning, the narrators and the audience are left with the inexplicable, a sense of doubt that lingers in the mind and claws at our tenuous hold of sanity. The more that a weird, cosmic horror tale can do this, the more successful I deem it to be. William Sloane, I am pleased to say, is a master of the genre; even now, I cringe and shudder at the bitter resolutions of these novels, haunted by their deranged casts of characters and oppressive settings. And that is exactly how I should feel.

In To Walk the Night, Jerry Lister and “Bark” Jones are roommates who discover the dead body of a favorite professor after returning to their university for a football game. But the body is found burned in an entirely inexplicable manner that leaves the roommates and the police completely baffled. Matters grow more complicated when they encounter Selena, the widow of the deceased professor, for Jerry and Selena quickly become embroiled in a whirlwind romance. Bark is suspicious of Selena from the beginning, although he remains ignorant as to the source of his uncertainty for a time. Then Selena begins to display a number of curious characteristics. She never talks about her past before her marriage to the professor. Often she is so cognizant of what people are thinking that she appears to be a mind reader. But there is no solid evidence that makes Bark distrust Selena, only a strange series of coincidences and a still unsolved murder. Jerry and Selena eventually decide to leave the city (much to the relief of all their friends and family) for a house in the barren deserts of the American Southwest so Jerry can work in peace on a project of his. For nearly two years the couple is gone, when, from out of the blue, Bark receives a telegram from Jerry asking him to come immediately. When Bark arrives, the situation is a powder keg set to blow… and blow it does.

The story is tremendously tragic in addition to being eerie. The friendship between Jerry and Bark is well established and the slow separation that grows between them in the presence of Selena is lamentable, especially as doubt begins to build within the reader regarding the true identity of Selena. It is a bit of a trite story, to be sure, but it is handled in a wholly irregular way — for the mystery does not seem to be one that can be solved with any human logic. The audience is left to wonder for most of the book whether Bark’s doubt is substantial, or whether he is undermining his friendship with Jerry for nothing. What makes the ending so powerful is that we are still left wondering this very question, even after the nature of the horrific mystery is illuminated to a certain extent. It is the persistence of this question that makes me agree with folks like Robert Bloch, who cites this novel as one of his all time favorites of the genre. Indeed, I even see in it the inspiration for a number of other works by various writers – this book having preceded them all.

The Edge of Running Water is of an entirely different feel that is closer to the mysterious prose of Wilkie Collins than to the maddening stories of Lovecraft. Richard Bayles travels to Maine to visit his friend and colleague Professor Julian Blair after receiving an urgent telegram. He arrives to find Blair in the midst of a mysterious experiment to communicate with his deceased wife by technological means. Advising and assisting Blair in this process is the loathsome Mrs. Walters, a medium who is as malign a presence as Nurse Ratched or Mrs. Danvers. At every turn she seeks to exploit the crazed Professor Blair and denounce Bayles to Blair — all for her own nefarious purposes.

It is finally Mrs. Walters, the medium who seemingly controls Blair, who really sells this novel. It is impossible for me to call this woman a villain (even though that is how I have come to see her in my mind) because she is really just a desperate woman afraid of losing something that she feels she has a legitimate claim to keep. Nevertheless, it is her attempts to control the household and hide the nature of Blair’s experiment that bring the whole thing crashing down — literally. She is cruel to Bayles, Blair, and the whole cast of characters. But she is just as blind to what is truly happening as Blair is blind to the true nature of his experiment. Blair is behind closed doors for most of the book, and we are left to wonder as to the nature of this experiment along with Bayles. The book only turns truly Lovecraftian when the doors are opened. We discover that Blair’s pain at the loss of his wife has driven him to reckless madness, so that he cannot fathom the dangerous consequences of his crazed experiment. At the end, after we discover what lay beyond the closed door, we are left with this curious notion: perhaps science (and ordinary human pain) can drive people just as mad as do the ineffable Elder Gods of Lovecraft.

The prose of these two works is exact. It feels as if every word rests in its proper place, just as it feels whenever one reads the renowned masters of the literary craft. Everything that pushes on the trite in these novels pushes back twice as hard with its ingenuity. If anything feels hackneyed, it is probably because it was done first by Sloane and then emulated by countless others. I could not put these two novels down. I felt like a kid again when I read The Rim of Morning — staying up late at night, under a single lamp, surrounded by darkness, my heart beating wildly at the mounting tension. I know of no better accolade to bestow upon a book than to state that it affected me so.