The Taming of the Queen by Philippa Gregory 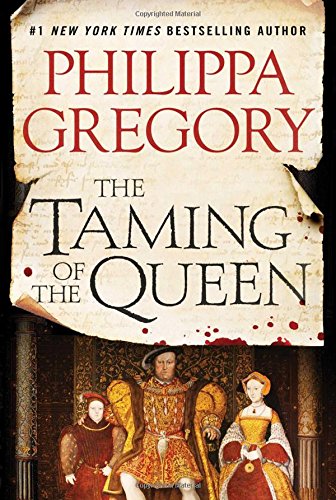 With her latest novel, Philippa Gregory has written more than a dozen books on the rise of Henry VIII as well as of his court, wives and daughters. Told from the point of view of Kateryn Parr, the last of Henry’s wives, The Taming of the Queen finds its chronological place is the middle of Gregory’s Tudor Court series.

A recent widow, Kateryn, whose sister Lady Anne Herbert has been at court as a lady in waiting to each of Henry’s wives, catches the eye of the King and he asks her to marry him. Though she has other plans for her future, she has no choice but to assent and put her desires aside. As his wife and queen, she has some power. She is aware that it is all dependent upon Henry. She is also in danger due to the many intrigues in the court of which she is not fully aware since she has lived her life far from London.

Gregory’s style of storytelling engages the reader in the world of the Tudor court of the 1540s, the empire-building military battles and the delicate political struggle between the papists and the reformers. Her characters are fleshed out both in their physical appearances as well as their personalities. The descriptions of the rooms and furniture, clothing and accessories reveal that they are not only physical items, but also laden with import in how they are chosen and used. For example, Kateryn wears layers and layers of jewels when Henry wants to impress an ambassador with his wealth and therefore his ability to raise and pay for an army.

The Taming of the Queen is a delightful read for the pleasure of its telling as well as the light it sheds on the lives and times of its historical characters.