War of Dreams by Anton Venter 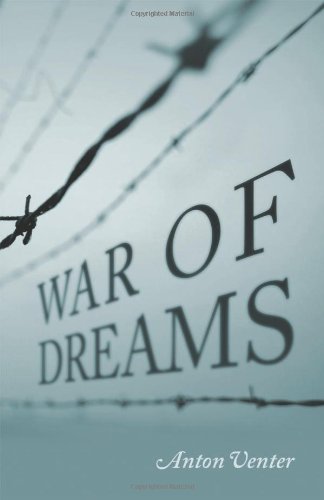 War of Dreams, a book by Anton Venter, follows a German family in a time of world conflict. When WWII arrives at his front door, Alexander Junker realizes he does not wish to fight but finds that he must. With his father and brother profoundly enthusiastic about taking part in this new war, and an eldest brother who gets himself killed for falling in love with a Jewish girl, Alexander finds himself between a rock and a hard place. Beginning work as an informant for the Nazi party, Alexander must figure out where his allegiance lies, as well as what it takes to become a man.

While mainly an enjoyable read, War of Dreams does have its few faults. Most of the book feels like Venter was simply looking for an excuse to put all of his WWII factoids into a single book, so that the story portion never feels like the start of his book. The facts and figures ramble on a bit at times, and the book often feels bogged down with too much information, thus losing focus on plot and characters. This makes the story hard to follow as well. Also, for some reason, the author occasionally shifts focus off of Alexander and onto his father – following the patriarch’s story and logic – and these chapters and sections tend to hold little of interest in comparison with the rest of the novel.

As a whole, however, War of Dreams makes for an interesting, enjoyable read. Readers get to experience a different point of view on WWII from the perspective of a young German soldier, demonstrating that not all Germans were of a like mind with the Nazi party. Although the information can seem tedious, it does add to realism of the settings and characters, as well as providing credibility to the story at hand. The book is decently written – not pretty, necessarily, but stoic and upfront. The character of Alexander is likable – awkward, kind, and wishing to keep to himself – and following his struggle with sexuality is particularly fascinating. In a time in which being homosexual was considered obscene and bisexuality was completely unheard of, it is understandable that there would be a lot of inner conflict for the character, who finds himself attracted to women but far more attracted to men.

There are several themes that readers can grasp onto throughout War of Dreams, but the one that recurs most often revolves around the idea of manhood. The novel offers many different plot points of how one, stereotypically, becomes a man: going off to war, losing one’s virginity to a beautiful woman, killing an enemy, etc. All of these Alexander accomplishes against his will, and despite the stereotype, none makes him feel any manlier.

The ending is good in the sense that it focuses on Alexander finally following his heart and doing what makes him happiest – thus finally becoming the man he’s always longed to be – but the twist/climax happens far too quickly and the ending feels rather abrupt. The reader may find him or herself wishing for a longer, more satisfying end. Other than that, War of Dreams is a decently satisfying read from start to finish.