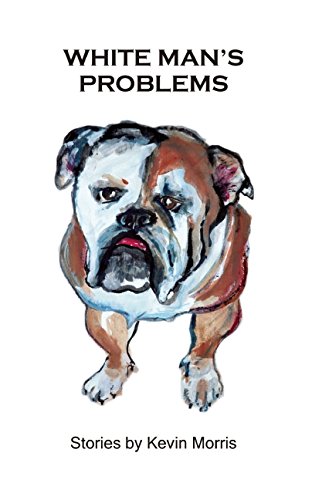 A man who has everything, except the ability to bring his child back to life. A teenager who will do anything to get his female classmate to notice him. A family trying to share a concert with their dementia-afflicted mother. A lawyer fearing he is about to be fired. These are the situations that make up White Man’s Problems, a collection of modern short stories by author Kevin Morris.

Morris quickly proves himself to be a fantastic wordsmith. Each piece in his collection manages to capture a unique voice, demonstrating incredible range as he believably takes on the role of a high school jock in one story and the voice of an estranged daughter in the next. He also avoids the common short story pitfalls of over-explanation and over-exposition. Each character has their own way of presenting their situation. Some are straightforward, some are elusive – as if they don’t want the reader to know what’s happening in their life – and this gives the reader a chance to discover the character before becoming enmeshed in the story. It’s a clever and effective way to engage us without simply laying out a summary.

Unfortunately, this good writing is not often paired with great stories. Readers will find that Morris’ stories lack obstacles, despite an initial promise of conflict. Without obstacles, there cannot be any risks, failures, or triumphs – the characters cannot be challenged or changed – and because of this the stories fall flat, without leaving much impact. Examples: the man who lost his child has long ago sunk into silent acceptance of the fact. The concert for the mother is rained upon, but without symbolism or effect. The lawyer doesn’t lose his job, but didn’t really care if he would have, anyway. Even these monotone situations could have meaning, if the point was the unchanging monotony of life, people moving forward without ever getting anywhere, or refusing to move forward in favor of being stuck. But if this is the message, it isn’t made clear, and instead we are left with confused half-meanings. A short about a lawyer who dresses up as a homeless man after work is assigned a nebulous religious symbolism, while another about a lawyer (yes, at least half of the stories are about lawyers) struggling to decide which mortgage to pay seems aimed at a very niche economic group. The endings don’t help, either. Each story comes to a screeching and unexpected halt; to the point that I sometimes had to check my iPhone to make sure I hadn’t accidentally skipped chapters. But no: it is simply that, having created no conflict, these stories have nothing to resolve and so at some point the story just ends without a punch line.

One awesome exception to this is the longest story in the bunch, the titular “White Man’s Problems.” This story, about a dad who goes on a school trip to try and show he has the empathy and compassion to be awarded custody of his son, was clearly given more attention and thought then the rest of the collection. Here there is conflict – conflict between the person the father knows he should be (a caring dad who wants to win his son’s affections) and the person he is (a scumbag who refuses to give up his first class seat to ride coach with his son). Here there is a meaningful ending – the last sentence summarizes the central question of the whole story. It is almost worth it to purchase a copy of White Man’s Problems just to read “White Man’s Problems.” This is where you will start to believe the back-of-the-book reviews by screenwriters and industry professionals calling Morris the next John Updike.

Then again, looking up Morris online reveals that he is the founder and co-manager of a huge entertainment law firm, which puts these reviews in gross perspective. Morris isn’t a starving artist who is tackling the troubles of the world and shedding new light on them. He is, like many of the characters in his book, a lawyer – one who has a talent at writing and decided to try his hand at publishing some fiction. Each chapter of his audio book is narrated, if not by Morris himself, then by some of Hollywood’s most prominent actors and actresses, ranging from Matthew McConaughey to Minnie Driver. These powerhouse voices add value, but also illustrate the disparity between the struggles Morris seems to be trying to highlight and the reality of his own position in the world. Perhaps that is why White Man’s Problems often falls so short of expectations. Perhaps Morris, though definitely a white man, is a little too removed from everyday problems to really capture their urgency and tragedy.