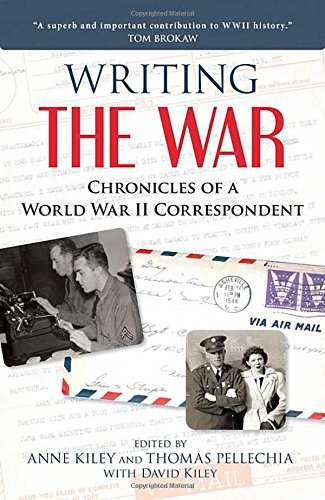 Writing the War is a memoir compiled from the love letters exchanged between Charles Kiley and his wife Billee while they were separated during the second World War. These letters have been assembled and edited by descendants of the couple. The letters are a great entry point for readers interested in the history of the war as it was lived by every day people. Even though Charles worked for “Stars and Stripes” and was better informed about the course of the war than the average citizen, his letters still had to pass the censor, so he was limited in what he could tell his fiance. Billee, on the home front, works in war industry and helps her mother run a hotel in North Carolina, where Billee and Charles first met. Her letters are relatively more frequent, and consequently where the memoir really shines is in her depiction of the home front. Some of the personal details may have been more interesting to the compilers than the general reader, but overall the material will retain the interest of the reader. This volume wouldn’t work well for readers who have little knowledge of the time period, despite brief descriptions of the action at the beginning of each chapter. Readers with basic knowledge of World War II will have no trouble following along with these synopses, and will enjoy this personal account a great deal.