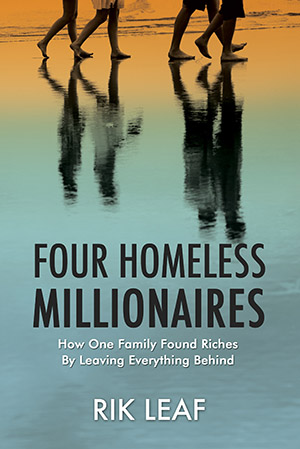 The idea of leaving behind everything that attaches us to one place, selling our worldly possessions and heading wherever we want can sound so appealing. What if you really did it? Not only for yourself, but taking your spouse, and two growing children along with you. Home school in the world of life, encouraging the artsy, creative side, crashing with friends, discovering some not so nice hotels, eating new and interesting foods… the possibilities of how this plays out are truly endless. Readers can discover how it works out for one family in Four Homeless Millionaires written by indie artist, Rik Leaf.

A delightful pairing to the book are the digital QR codes throughout the book, which link readers to the YouTube clips of the movies Leaf and his family recorded, called “Where in the world are Zion and Riel?” – his two children. Through reading (and watching the videos) the charming book of the hilarious adventures, very real experiences, and honest parenting challenges readers will find themselves connecting with this family, which brings a closeness and sense of adventure which make Four Homeless Millionaires feel like the fun family you love having come for a visit.

The Leaf family begin and end their adventure in Canada, travelling across the globe to other continents. The ability to do so funded by the global touring of his band Tribe of One. His wife, Zara, continually strives to live economically, within their means and the two work hard at never creating a world where their new age children live like spoiled Hollywood brats, which have no appreciation or respect for the world. A comical adventure is held in nearly every new destination, from the horror movie in which Rik maybe goes too far with being scary, a pouty teenager drug away from the Xbox, to explorations of castles. The additional YouTube viewing of many adventures brings new life to the concept of an autobiography and reality television. Four Homeless Millionaires is a surprising delight and an envious family adventure.