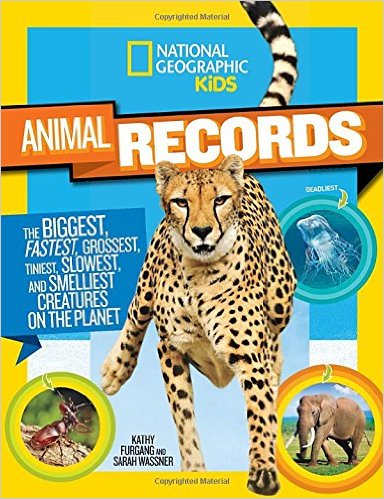 This kids’ book is a winner! How many times has my grandson asked me, “Hey, Grandpa, what’s the largest (or fastest, or deadliest) creature in the ocean?” This book will expand his horizons, and mine.

Packed into its 208 vividly illustrated pages is enough information to make a smart student wince and a dull one become a star. For example: who wins if you pit a large, antlered caribou against a small, furry wolverine? (Hint: the feisty wolverine.) Or: what is the ugliest animal on the planet? Is it the 12-inch deep-sea blobfish? Or the dumbo octopus? Maybe it’s the hagfish (nicknamed “snot eel”) that gags its predators with slime? Or maybe it’s that master of camouflage, the wily sea dragon? For answers, read the book (or ask my grandson!).

Which animal is faster than a human being (at only 28 miles per hour)? The housefly is one, and the golden-mantled ground squirrel is another. But, see the cheetah, which can run at 60-70 mph on the ground – and the peregrine falcon, which reaches 34 mph in straight flight and up to 200 mph when diving for prey. And, check out the sailfish, which can swim in bursts of up to 68 mph.

Also covered are arachnids (spiders and scorpions), birds, dogs, tiny creatures with super-camouflage, and some of the extinct dinosaurs. For example, the 9-pound Compsognathus, which lived 50 million years ago, clocked in at speeds somewhere between a race horse and a sprinting cheetah, reaching top speeds around 40 miles per hour. (“That’s way faster than you can run, Grandpa!”)

The book has seven fact-filled, attention-grabbing chapters, featuring scores of critters large and small, fast and slow, loud, weird, and deadly. Each chapter compares winners and runners-up by category, with detailed case studies, attention to special features and oddities, lots of numbers to memorize, and a fun-and-games IQ test. In short, there’s enough here to keep kids occupied for hours, preparing to show off their growing knowledge about the animal kingdom for days on end.

“Hey, Grandpa, which was the largest dinosaur on the planet? Which was the tiniest? Which one had feathery wings? Which was the loudest?” Ah, so much to learn! If you’re looking for a good gift for that curious 8-12 year old on your list, this is it.