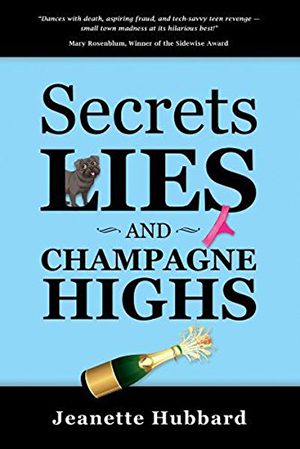 On a crisp winter mid-afternoon, Claudie O’Brien finds herself parked in her BMW with some old pills, a bottle of champagne, and no reason to keep on living. When an accident occurs in Claudie’s attempt to take her own life, she finds herself rescued by Peter, a local vice principal turned tow truck driver. In Secrets, Lies and Champagne Highs, written by first-time novelist Jeanette Hubbard, readers follow Claudie’s journey to Sisters, Oregon, having moved into the remodeled garage of Peter, his two sweet kids, and his not-so-sweet second wife, Chrystal. Claudie quickly realizes that she’s entangled herself in more than she anticipated. On top a botched suicide, there’s the meth lab across the street, a non-existent murder plot turned reality, a phony spiritual guru, and more affairs between local citizens than she can keep straight.

It’s not every day you come across books that are as much fun to read as Secrets, Lies and Champagne Highs. With so many serious, melodramatic works being produced nowadays – most of which readers feel like they have to trudge through – Hubbard manages to create a book that is a breath of fresh air. Secrets is not only fun, but funny all around. The interactions and odd scenarios the characters find themselves in are enough to put a smile on any readers’ face. The book is a hearty light read, filled with snappy dialogue and intriguing plot developments. It’s incredibly well paced and, although perhaps only a lighthearted take on the mystery genre, interesting enough to keep readers’ attentions peaked continuously. All together, this book is a simple joy to experience.

Oregon readers will find it nice to have a book set in their home state for a change. The story primarily takes place in Sisters, though both Bend and Portland get a handful of shout outs throughout the text. All of the characters are enjoyable – even the ones who are meant to be more on the corrupt side of things. Altogether, it’s a really well done ensemble piece. Though Claudie’s journey is the clear focus of Secrets, there’s such a wonderful array of other characters surrounding her that readers will never find themselves bored.

It’s also quite pleasant to have a book with an older woman as the protagonist – the age demographic authors seem to forget about most. It would have been so easy to make Claudie a young woman in the prime of her looks and life; something audiences see far too often in books such as these. Women fifty years or older tend to get slated as the crazy and/or busybody neighbors, or sometimes the harping relative or kindly grandmother. Instead of any of those cliche options, audiences are allowed to see Sisters and its crazy inhabitants through the eyes of Claudie, a woman in her sixties who is more than just a stereotype. Claudie’s a delightful protagonist to boot. She’s well-rounded, sarcastic, and sympathetic. She’s also experienced in life, thus has insight on everything going on around her, also making the story of her attempted suicide even more intriguing. Truly a great protagonist for a great read.