Sharky Marky and the Big Race by Lance Olsen, illustrated by Thomas Perry 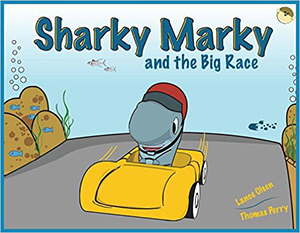 Sharky Marky and the Big Race is another children’s picture book by Lance Olsen and Thomas Perry. Technically the first book in the series – this reviewer happened to read them out of order – it’s about ‘Sharky Marky,’ a shark who races cars with his friends beneath the sea. As with the other Sharky Marky book, both the inside front cover and inside back cover acts as a coloring book. It’s a standard children’s picture book with illustrations of the characters and a rhyming storyline.

“Octo Eddy’s in second,
With Meanie Marlin close behind.
Those two don’t race fairly,
And they will not be kind!”

Instead of focusing on alphabetizing this time around, this book centers on counting. It’s a countdown through the race for Marky, and he narrowly avoids the pit-falls of cheating all while trying to teach kids how to count. His enemy, Octo Eddy, is back again, this time to spray ink in his face while trying to win the race. The book is kind of an interactive experience as it suggests that kids should call out the numbers on each page in order to help Marky win the race.

Once again, the backgrounds come across as lacking visually. As the racecourse is under the ocean, it could be filled with many interesting life forms from coral to seaweed, and instead the book feels a little empty. Otherwise, the character illustrations are completely adorable. Although, there is the somewhat baffling presence of an inexplicable beaver taking part in a racecourse under the sea…. Again, Sharky Marky and the Big Race is a clever package of learning mixed up with a fun character that is overall likeable and cute. The book is worth picking up if a book about counting and racing sharks is your kids’ style.