Songs of a Dead Dreamer and Grimscribe by Thomas Ligotti 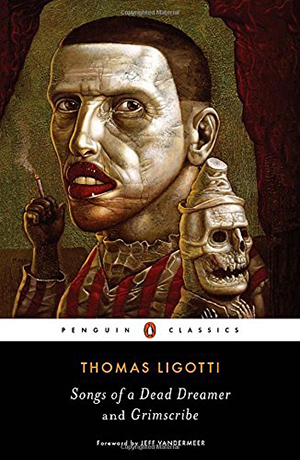 Be afraid, gentle readers! Another world rests firmly atop our own – a world of chaos and horrors ineffable. It would only take a gentle nudge, the smallest inertial force, to break through the veil and inundate the mind with its sea of madness. But this other world should not be shunned by all. To some, those chosen few, it offers knowledge long sought. For these few, it is a beautiful, yet perilous, world incomprehensible to other mortals. For these others, it is a sure and gruesome death – slow and exotic like a primitive dance. Darkness is all that lingers in its wake.

Such is the world of the Grimscribe himself, Thomas Ligotti, made readily available to the masses for the first time in this new Penguin Classics collection, Songs of a Dead Dreamer and Grimscribe. A fringe figure, yet with a devoted and cult-like following, Thomas Ligotti’s books of philosophical horror have been notoriously difficult to obtain hitherto with many of his single works fetching prices well over a hundred dollars online. I, for one, could never scrounge up a copy to read before now and never felt like taking a chance with such a hefty price tag attached. In hindsight, I wish I had taken a chance, because the words on these pages are mystical and fantastic, unparalleled by any except for the masters of the genre. But you, gentle reader, need not worry about this. You no longer have to take out a loan in order to read Ligotti. His dark world is readily available to you now – if you have the constitution for it.

Though all the stories contained within this collection are classic in their own right, there are a few that are a cut above the rest, vaulted to the heights of timeless horror fiction. The first of these is a trio of stories entitled the “Nyctalops Trilogy.” These stories are playful in style but undeniably twisted, obliquely remarking on the inability of the average person (or, in these cases, victims) to see the darkness before him or her. The first concerns a man on a date, but from the start, the reader is given only what the man says as if the words of his date are trifling and inconsequential. After much amusing and psychotic rambling on the man’s part, he makes his date a drink that ultimately paralyzes her. But it is not to take sexual advantage of her—no, it is for a purpose far more strange and terrifying that just hints at some world where the laws of physics are inconsequential (for this is where Ligotti dwells). The second story concerns a magician who has just given a private show for a really upscale crowd. Afterwards, as the magician mingles with the crowd, it becomes obvious that there is a secret about the performance beyond the usual magician reticence. It is a reveal in which the magician revels – all for some ghastly and didactic purpose upon his unsuspecting crowd. Finally, the strangest of the three: Headlines warning women of a string of missing girls in gothic garb fail to dissuade one sex worker from entertaining a mysterious stranger. She thinks she knows better. She thinks that she can handle herself. She thinks she is in control when she has the stranger bound up. But there is no precaution against forces foreign to the sane mind, against the predatory darkness of this stranger.

These stories are not about exploitation, but about the force of the human mind to deny the darkness that presses against it until the bitter terminus. Against such obscured forces, there is no preparation – more like only an acquiescence to its supremacy. Yet these tales, despite their predation upon life and sanity, or perhaps because of it, are remarkably beautiful. One nearly yearns for the downfall of humanity in sight of this other, more mysterious world. Like in fairy stories, the other world enchants and lulls us within its confines for a glimpse at its novelty. We mere mortals, who are inundated with the mundane and quotidian, lust after all things shiny and new. This observation seems to be the theme of Ligotti: we as humans cannot help but to be drawn to the dark and dangerous. We dance with it, both shunning and desiring it – always one precipitous step away from our horrific and total demise. This is where we yearn to dwell. So this is where Ligotti builds his readers a tenuous home.

There are many other fantastic and memorable stories (I urge you to read them all – from the macabre vampire tale of “The Lost Art of Twilight,” to the classic ghost story “The Glamour,” to others too many to recount in this review), but the other one that deserves special mention is “The Last Feast of Harlequin.” This story is a tribute to Lovecraft from start to finish and equal in all ways. An anthropologist making a study of clowns learns of a fool festival held annually in the small Midwest town of Mirocaw. He is unable to discover any information about the festival in his researches, so he makes plans to attend during his winter break. When he arrives, he finds the town strangely silent concerning the particulars of the festival, but this silence does not stop him from discerning that there seems to be two types of clowns within the small town. The first type, dressed elaborately, suffers brutally at the hands of the other townspeople, who push and savagely mock the clowns. But nearly unacknowledged is a second type of clown – a dim-witted, slow-moving sort that shambles about town. The anthropologist theorizes that the first type is there as a symbolic scapegoat for the second type, but still he cannot discern the mystery behind this dichotomy. He discovers the maddening and otherworldly truth at the end of the festival, disguised as one of the dim-witted clowns, when they are all assembled in the back of truck and unloaded adjacent to a gaping hole in the middle of the earth.

This memorable story reads like Lovecraft’s “Dagon,” only Ligotti does not suffer from the inability to create fully fleshed characters like his predecessor. This characterization gives Ligotti a distinct advantage because there is gravity behind the outcome of the story. Characters that we come to know and to love encounter these perils; to know more about this other world we must risk their lives and their sanity. We continue to read at the peril of these beloved characters. This is the genius of Ligotti. Every turn of the page reveals life or a fate worse than death for his characters. Thus Ligotti draws us into his work until it consumes us, just like its other world consumes so many of his characters.