The Art of Mad Max: Fury Road by Abbie Bernstein 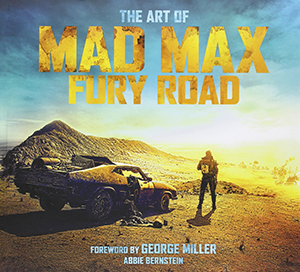 The Art of Mad Max: Fury Road is a fascinating art book and companion guide to the film. This hardcover coffee table book is broken up into a number of chapters discussing various aspects of the film, and the world in which it exists. Many of the main characters – such as Furiosa, Immortan Joe, and the Wives – have their own sections. The book also contains chapters dedicated to various machines, specific scenes in the film, and one chapter centered on the character’s usage of ornaments, masks and weapons.

The book is incredibly colorful, and includes images straight from the film, but the real strength of the book is in the shots taken of the actors filming the movie, storyboard ideas, and concept images. Luckily, The Art of Mad Max: Fury Road isn’t just a smorgasbord of pretty images; the book gives readers a look into the decision making process from the screenwriters, production designers, costume designers, makeup artists, and the actors themselves. This behind the scenes look adds layers of depth to what was already an entertaining film, and would be a wonderful gift for any fan of the new Mad Max movie.