The Madness of Cthulhu, Volume Two edited by S.T. Joshi 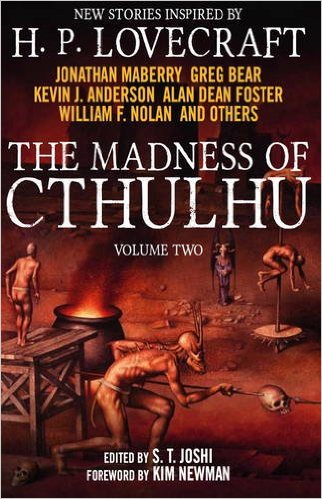 Contained within this volume are tales of madness. But it is not just the characters who are driven mad in this Lovecraftian collection of weird tales; the reader is driven mad as well. The knowledge of a bizarre other world is not what prompts this madness, however, but the trite and shallow nature of almost every story in this collection. Lovecraft has inspired many followers – not all of them talented. Or perhaps when penning the stories for this collection, the writers’ hearts were not in it. In any case, I was driven mad by the flatness of these stories. It was like walking a stage set for Macbeth after walking through a legitimate Scottish castle; the one is merely a semblance of the other with none of the actual substance or history. Thus it is with these hastily scribbled stories that are more like outlines than weird tales. Perhaps my bar is too high. I know pulp tales are not noted for their depth – that is fine. But if you are going to imitate a master, might as well put some effort into it.

The collection embarks with a tale of Captain Nemo (of Jules Verne fame) who stumbles across an ancient underwater city, from which he hastily flees after exploring its sunken streets and encountering its strange and ancient guardians. Yet with an outstandingly complex (and already established) character like Nemo, Kevin J. Anderson manages to add nothing to either the character or the story, relying instead on the novelty of Verne and Lovecraft – nothing more.

What follows are a bunch of tales with the same problems. One is about a Soviet experiment on a dormant Shoggoth that the reader finds caused the accident at Chernobyl. Nothing is added to the Mythos. Nothing stands out with the characters. Again: novelty. The name Chernobyl is the only draw, the only identifying mark. William Nolan’s detective story about someone trying to raise some Elder God comes off as equally rough as it tries to be pulp noir and Lovecraft, but is really just a distorted amalgamation of each – like the creature in John Carpenter’s The Thing. Speaking of which, there are multiple stories that attempt to pick up where At the Mountains of Madness leave off, but I found them a little ham-handed in their treatment. It was like going out for a fantastic meal, but you do not finish it all so you take it home. Then, when you nuke it the next day, you nuke it all to hell so that it burns the roof of your mouth and tastes nothing like the meal you had the night before. So here I am, my mouth left burned and bitter and disappointed with only the memory of how splendid my Lovecraft meal was. The worst was the Joe Ledger story by Jonathan Maberry. It was like reading a bad Tom Clancy novel (which is, I know, a redundant statement). The less-than-memorable characters just spout military jargon and are given intel by some deus ex machina supercomputer that can hack anything and tell them anything they need to know, so that exposition need be nothing more than “ask the supercomputer.” Ridiculous! They travel to some Antarctic installation. They encounter stuff. They run away to talk about it. Nothing. That’s it. Did I miss the memo or do people just not get Lovecraft? Where is the mood? The atmosphere of mounting tension that makes your skin crawl? If you are going to write a story along the vein of the Cthulhu Mythos, you’ve got to bring your A-game and give me a creepy vibe.

The one tale worth its ink is “The Blood in My Mouth” by Laird Barron. These are some of the most fleshed-out characters I have read in an age. They’ve got fears. They’ve got parental issues. They’ve got relationship issues. They’ve got humanity – in the face of inhumanity. Their actions are not based on logic, but human emotion. The voice that Barron gives this story makes it seem as if a more coherent Kerouac was the one who stumbled across this mysterious portal to another world in Alaska. The narrator is a tormented soul who bums around Alaska getting into bare-knuckle fights until he is tethered down for a bit by Erica, a beautiful and tormented floozy who happens to take a liking to our bum narrator. There is a mystery about her, for it is revealed that she is a genius who seems to be conducting her own secret experiments on the side. When they visit her parents, the mystery only deepens when the narrator discovers that her now drunk and gambling-addicted parents were once bigwig scientists for a secret government project – the implication being that they discovered some awful truth about an alien life form that turned them to a life of empty hedonism. Erica hints at this truth throughout, but before the narrator can learn for certain, she disappears (probably into some mysterious portal in the middle of the Alaskan wilderness). The narrator searches for her, suspecting an end that is far from natural, but it is not until his death in a bar brawl that he seems to uncover the otherworldly truth about what happened to Erica.

There are other passable stories in the collection, but “The Blood in My Mouth” was the jewel. Erik and Greg Bear’s story about a derelict spacecraft that defies the laws of the physical universe is also quite entertaining and fresh, acting as a Lovecraft tale set in the far future (which I dug). The rest are not entirely memorable. As I said, these are very flat imitations that left me wanting. If you want an easy-to-read collection of stories with no meat, then this collection is fine – but right now I am hungry for the good stuff.