The Road to Relativity by Hanoch Gutfreund and Jürgen Renn 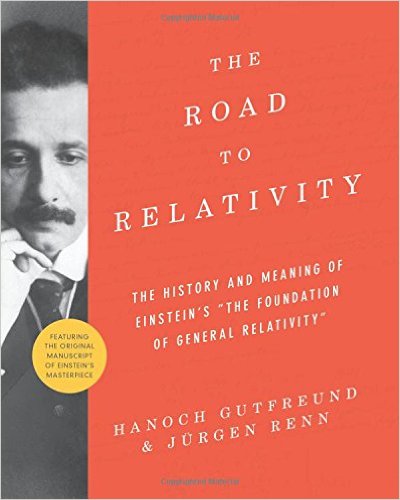 November 2015 marks the hundredth anniversary since the publication of Albert Einstein’s theory of general relativity in the journal Annalen der Physik. A decade following the publication of his special theory of relativity – in which Einstein described the relationship between space and time – this new theory extended to take into account the concept of gravity. Several new books commemorating this moment in the history of science draw on archival materials and present Einstein’s ideas for the nonspecialist, including an encyclopedia and a biography. The Road to Relativity, by Hanoch Gutfreund (a theoretical physicist from the Hebrew University of Jerusalem) and Jürgen Renn (of the Max Planck Institute for the History of Science in Berlin), explores the intellectual development of Einstein’s general theory through an examination of the original manuscript of Einstein’s paper in German. Facsimile images of that paper are shown on the left-hand pages with Gutfreund and Renn’s commentary, explanations, and background information on the right-hand pages. The book also includes a chapter placing Einstein’s paper and intellectual development in historical context, as well as appendices for a chronology, brief biographies of physicists and others mentioned in the book, and an English translation of the manuscript. While geared toward the nonspecialist, this book presumes a familiarity with physics and mathematics, and would not be the best choice for a first introduction to Einstein’s ideas. For those prepared, though, The Road to Relativity is a fine melding of science and history.