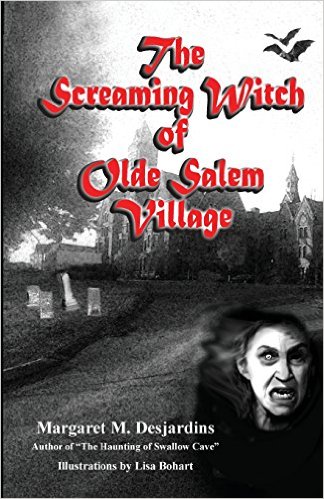 Zack is out of school for the summer but that doesn’t mean he has time to relax. His grandpa insists that Zack spend the summer with him and help investigate mysterious goings-on at Overlook Heights Apartments. There are stories of people smelling apples and hearing crying. It turns out the apartments were built over the bones of an old mental hospital and the whole place was the site of the Salem witch trials. As Zack – or “Z-Dawg” – delves into the history of the place he finds that the real story lies with two people: Sarah Bradshaw and John Hathorne. Sarah had discovered a secret about John Hathorne, and because of that he convicted her of being a witch and had her executed. Additionally, he placed a curse on her entire family line. That curse is still affecting her descendants, a girl in the building named BB and her mom. They are broke, her mom is out of a job, and they are out of options. It doesn’t take long for Zack to discover that the curse is real and that there is a real presence of evil around the apartments. He must work fast with BB and his new friends in the building to discover what secret Sarah Bradshaw discovered before it’s too late for BB and for Zach too.

The Screaming Witch of Olde Salem Village, by author Margaret M. Desjardins, is a ghost story mystery for older kids in the vein of the Hardy Boys and Nancy Drew stories. Zack is a reasonably experienced detective (this is the third book in the Z-Dawg series) and knows how to look for clues and read people. He is also a teenage boy, so the reader gets to see him get tongue-tied with BB and feel the need to impress the other boys he meets in the building as well. Zack isn’t perfect, either – he tends to judge people a little too soon – but overall he’s a fun lead character. BB is also a great character, with fiery hair and a personality to match. She’s not afraid of calling people out on things and is courageous in her determination to learn the truth about her relatives.

What’s less successful about the book is both the dialogue between the characters and the overall character reactions to events. The dialogue in the book feels as if it can only exist within a book; the words feel formal and thoughtful and not realistic, particularly for a group of teenagers. Additionally, the reactions of almost every character are mostly odd overreactions. An example is when Zach steals a key from the lobby to find out what it belongs to: the rest of the group is shocked and disgusted and certain that he will go to jail. Similar incidents occur throughout the book and come off as unrealistic and generally overwrought.

The overall plot of the book is interesting. It’s enjoyable for the past to meld with the present for the characters. The story unfolds at a nice pace and comes to a satisfying conclusion. It may be a little scary for some kids but ultimately older children or younger teens would enjoy Z-Dawg’s new mystery.