Thoughts of an Unlikely Messenger by Carl Burton 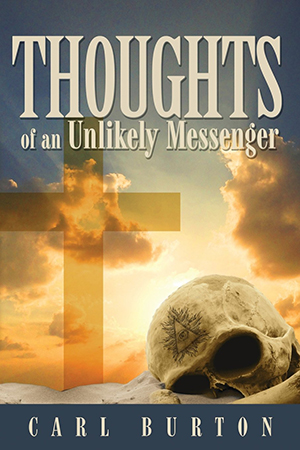 This book is aptly titled, as the first chapters are autobiographical and describe a life that seems unlikely to produce such a book. Mr. Burton was born and raised in Detroit Michigan by an abusive father and a mother in denial. His grandparents were a positive influence but couldn’t do everything. Young Burton was kicked out of schools for fighting and has generally made a mess of his life clear through community college and several decent jobs, which he failed to stay with due to other life pressures.

The author says that he was spiritual from the age of six and continued his spiritual life more through prayer than affiliation with churches. For the temporal side of his views on of life, one of his middle school teachers was an ex-Black Panther who introduced him to the main alternative views expressed in this book. All in all, the book describes a bumpy path to maturity and faith.

Briefly, the narrative in the book is this: Fallen angels – or alien visitors from the sky, depending – mated with human women, stuck around as spirits who divided up the post flood world among themselves to administer. Corrupt, really, with knowledge à la the tree in the garden from Genesis. Over time, they morph into, or gain control through the Illuminati, the Knights Templar, and Freemasons. They and their minions are still exerting control over the world and are corrupting it, as before, with knowledge. The aim of this is to culminate with the rebuilding of Solomon’s Temple in Jerusalem in the end time, which is soon. The real life conspiracies of 9-11 and Katrina, are included, as are a slew of others allegedly ordered by the United States to behead the faithful at the behest of the Antichrist.

The last part of the book deals with the seven seals in Revelations. Revelations is a book that has perplexed generations of theologians. How are we to deal with this? Mr. Burton seems to offer two very different, but not mutually exclusive ways: One is the gold standard hold fast to your faith, spread the word and disrupt the evil. The other, which this reviewer finds somewhat compelling, is to live free and avoid the corruption of the world by helping others, brotherly love, and simple living – best exemplified in the movie The Gods Must Be Crazy.

Thoughts of an Unlikely Messenger is worth checking out if the subject matter interests you, but it may not be to everyone’s taste.