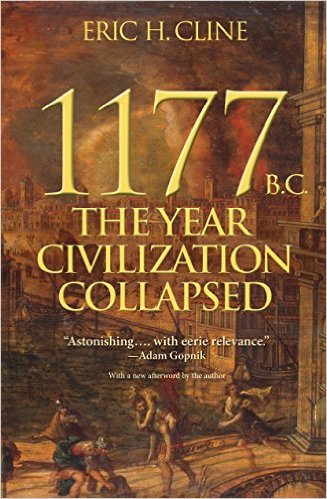 1177 B.C.: The Year Civilization Collapsed is the first installment of a new series: Turning Points in Ancient History. This volume focuses on the Bronze Age civilizations around the Aegean Sea, the Mediterranean Sea, along the Nile River, and down to the Persian Gulf. Some of the names will be familiar; many will not. Fortunately, there is a comprehensive map of the region and its civilizations as the frontispiece. Be prepared to refer to it often, as the places and people are often confusing unless you’re already familiar to some degree with the area and times. I found the strange names and reverse calendar particularly challenging, even though enough resources are provided to keep them straight. In spite of the challenges, it is a pretty good read: informative and interesting.

The first three “acts” cover one hundred years of history each, chronicling the prominent places and people, and the wars, treaties, and trade that went on. The fifteenth and fourteenth centuries B.C. kind of set the stage for the thirteenth century when the area was in full flower, with trade and communication between the kings and their counterparts in other areas. A truly interesting part is that some of these communications were recorded for our perusal 3000 years later. The clay tablets that were the recording media of the time have been found mostly near tombs and the remains of palaces. They give us the specific knowledge – who, what, why, and where – necessary to compile an accurate history.

The crux of the book is: what brought it, the Late Bronze Age, to a halt? What ruined a thriving international, interconnected world community in the relatively short time of fifty to 100 years? There are about four possibilities: Natural disasters such as drought and an earthquake all struck during about a fifty year period. Internal rebellions arose, possibly brought on by the stresses of earlier societies. Systems may have collapsed thanks to accumulated damage throughout the region from the previous cases. And last, invasions by the sea peoples took place at least twice. These sea peoples remain unidentified, and could have been part invasion and part migration. The author seems to give them a large share of the credit, but they remain largely obscure.

All in all, the book isn’t a real page-turner, but for those interested in the rise and fall of the Western civilizations of the Late Bronze Age, it’s all there. In addition, there is food for thought here. Civilizations rise and fall and none has lasted. Today, we have a global, interconnected, vital civilization like during the Bronze Age – and many similar stressors… Maybe we can learn from history once again.