A Bride at Last by Melissa Jagears 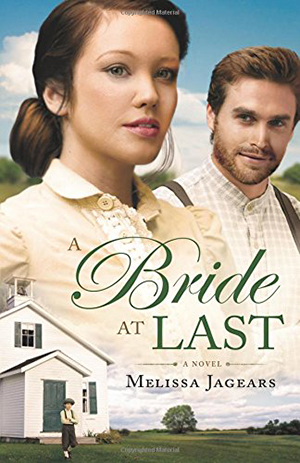 Kate Dawson has quickly adjusted her life from a mail-order bride to the local schoolteacher in a small town in Missouri in the late 1800s. She presumes she will take on the responsibility of parent to one of her students whose mother has recently passed. Trying to figure out where the two of them will reside is just one of the new problems that develop for Kate.

Two men arrive in town claiming to be the father of the 9-year-old Anthony. One of the men Anthony knows. Anthony calls him Pa, but doesn’t like him as this man drinks and makes Anthony steal and pick pockets for extra cash. The other man, Silas Jonesey, is only known to Anthony by things told to him by his mother, and she never had a kind word to say about him. She had been a mail-order bride for Silas but complained about farm life and never told Silas she was pregnant when she left him.

It immediately becomes clear to Silas that Kate truly loves and cares about Anthony, and that Anthony truly cares about her. Silas is attracted to Kate and includes her in his interactions with Anthony as he tries to get to know him. Kate watches these interactions carefully and notices the caring attitude displayed by Silas when he is with Anthony. Talks of marriage and family fall to pieces when the past comes to haunt both Kate and Silas. Will he be able to forgive Kate her past? Will she be able to forgive his history as a drunkard?

The author did a nice job of keeping the story in the historical framework she was writing about. The setting of the town, and descriptions of the train were described realistically. The typical lives of women were kept in perspective with the realities of the time period. The characters, and the readers, were kept in the dark about their future right up to the end. A Bride at Last is an easy to read and enjoyable story.