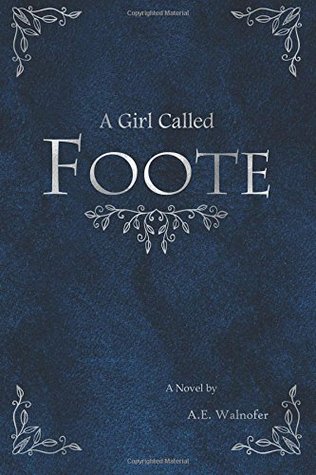 Love conquers barriers of class and economics to bring two young souls together in A Girl Called Foote, a young-adult romance novel written by A.E. Walnofer. Set in Victorian England, the book features the eponymous Foote (born Lydia Smythe), taking her through twenty years of her life, bringing her from a farmer’s daughter to a baronet’s servant. That baronet is Jonathan Clyde, recent heir due to the untimely death of his elder brother and father. The book jumps between these two characters, switching points of view with every other chapter.

They say to never judge a book by its cover, but A Girl Called Foote actually benefits from the cliché. The cover is tasteful and has an understated beauty that speaks for the contents within. The font, a lovely silvery-white color, sits on a deep blue background that appears to have the texture of leather. In the corners and underlining the title are elegant leaf-like designs that frame the text nicely.

The simple yet elegant cover is analogous to the characters within. Both main players are interesting, and (uniquely, for a romance) the focus of their chapters is less on building up their romantic tension and more on developing their actual character. Jonathan is struggling to live up to his family’s expectations of him as a member of nobility, and Lydia’s journey nicely mirrors this – she is also struggling against expectations of the nobility, but as a servant instead of a lord. The way their chapters use this common ground to push a relationship forward from two perspectives is the beauty at the heart of this literary dance.

Despite this, the dueling chapters sometimes have issues. Developing two characters simultaneously is a difficult task; it asks a lot of a reader to become invested in not one, but two main characters, and A Girl Named Foote does not achieve this quickly. Most readers will find the opening chapters, where Lydia and Jonathan are children, to be difficult to get through. The connection just isn’t there yet, and what is done in these early chapters doesn’t lend much to the overall story. Everything important here could have been summarized, or added more subtly in later as callbacks. Unfortunately, this may end many a reader’s journey before he or she really gets into what makes this book good.

Also, while the two main characters make up the bulk of the chapters, occasionally a smaller character’s point of view is added in, giving us a third party’s account of what is going on. Invariably, these additions aren’t enlightening, but are instead jarring and break up the flow in an uncomfortable way. These feel like they were probably fun to write – an exercise in trying your hand at different perspectives on the main story – but it just isn’t that interesting to read the maid’s account of events we already understand.

Don’t let these minor failings stop you from picking up A Girl Called Foote. Set aside an hour to really focus on it and get past those tough first chapters, and you will find writing that is clever and witty, with a polish that is unusual in self-published works. The characters inspire empathy, the romance feels pure and true, and the story itself is perfectly paced. It has a cover that looks beautiful on a bookshelf, but it will spend more time in your hands than resting there.