Alien Next Door by Joey Spiotto 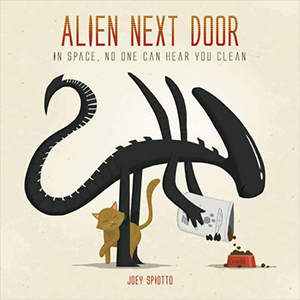 Alien Next Door is a cute, and darkly humorous gift book for fans of the Alien movie franchise. The book contains over sixty different comic images depicting the classic alien bustling about the spaceship and various other locations, and interacting with the various crewmembers, who in this universe appear to get along with the alien…for the most part.

The illustrations are cute and goofy – if geared towards those with a slightly dark sense of humor – and include scenes like the alien playing basketball with Ripley, walking a facehugger, and cleaning up a blood-spattered hallway. There isn’t a narrative to go along with the pictures, which just seem to display various shots in time. Author/illustrator Joey Spiotto includes a brief introduction before the artwork that talks about his brief communication with H.R. Giger regarding a possible children’s book that unfortunately never materialized due to the esteemed artist passing away in 2014.

Alien Next Door is a short collection of humorous illustrations that would make a great gift for fans of H.R. Giger’s artwork, and his Alien creation. However, it may not have a terribly long shelf life.