Cut Me In (Hardcase Crime) by Ed McBain 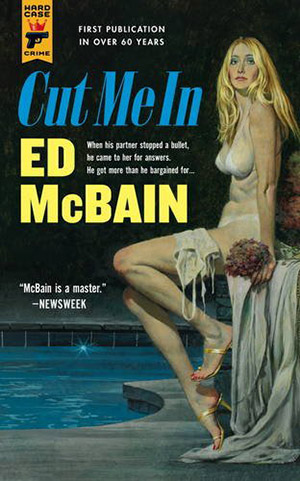 Cut Me In begins with the murder of one of the partners in a literary agency, Gilbert and Blake, which specializes in marketing crime and detective novels. When Josh Blake (the narrator) arrives at the office one morning expecting to find Del Gilbert there, bright and cheery, he finds something quiet unexpected. Del is there, alright, sprawled on the office floor dead, in a pool of blood. And all around him important papers are strewn about near the open safe. It takes Josh only a moment to determine that one of the most important documents, a lucrative movie rights contract, is missing. This is murder, says Josh, combined with theft.

The police assigned a rather cerebral Detective-Sergeant named Di Luca to the case, but Josh is unimpressed, and their relationship starts off badly. After the cop tells Josh to leave the crime scene to the police, he walks out of the office “cursing the stupid cop Di Luca with his goddamn tweed suit and his jumpy questioning… It occurred to me then [he tells himself] that I was probably a prime suspect, and the idea amused me. Josh Blake, murderer.”

Their relationship continues to be rocky, as Josh sets out to beat the cop at solving the two crimes. Along the way there’s a knockout slugging and even more murders. McBain writes about them (from Josh’s perspective) in the classic crime writing style of his day: “I was worried. I was really worried now. You can take one murder in your stride, without losing much sleep over it, and you can laugh about a comparatively minor slugging. When the things begin spreading though, it’s time to worry. It’s time to start chewing things over ― chewing them hard.

“And there were a lot of things that needed chewing…”

Without giving anything away, that’s the gist of the story. Throughout the book, the intrigue remains high, the language coarse, loose ladies spice up the storyline, and there is the usual all around mish-mash of unexpected twists and turns so often found in hard-boiled mystery stories dating to mid-20th century America.

Equally intriguing is Ed McBain’s own life story, and the various names he wrote under along the way. First off, McBain is not his real name. When Cut Me In was first copyrighted and published in 1953 it was listed under one of his many pen names, Hunt Collins. In 1955 Cut Me In was republished as The Proposition. And now, it is being revived and re-issued as Cut Me In, again, but this time by Ed McBain. It is the first in the new (old) Hard Case Crime Book series from Titan Books.

“When his partner stopped a bullet, he came to her for answers. He got more than he bargained for…”

Hunt Collins and Ed McBain were pseudonyms for the New York City crime writer whose Italian birth name was Salvatore Albert Lombino. He left that rather gangster-sounding moniker behind when he legally changed it to Evan Hunter in 1952. Confused? I don’t blame you. Collins/McBain/Lombino/Hunter wrote novels under a whole slew of nom de plumes, including Curt Cannon, Ezra Hannon, SA Lombino, and Richard Marsten. And some observers think there may have been one or more others, as yet unknown. Ed McBain is the name under which he wrote most of his crime novels; hence, it is the name Titan Books uses.

After high school McBain served briefly in the Navy, then enrolled at Hunter College, on New York City’s Park Avenue. He graduated Phi Beta Kappa in 1950 with a double major in English and Psychology, and a double minor in Dramatics and Education. (The names Hunter Collins and Evan Hunter are derived from Hunter College.)

After graduation Hunter (McBain, that is) worked for a while at a literary agency, which was the basis for Cut Me In. He also taught briefly (17 days) at Bronx Vocational High School, before quitting in frustration. He couldn’t deal with the adolescent rebellion. But he used it well, by writing (as Evan Hunter) his popular novel Blackboard Jungle (1954), which within a year became the movie, starring Glenn Ford.

After that, however, crime novels became his strong suit, and he is best remembered (and won many awards and kudos) as a master of the police procedural, popularized in the 1960s TV series Dragnet created by Jack Webb.

Altogether, McBain, or Hunter (or by whatever name you wish to call him), authored 122 novels, dozens of short stories, twelve collections, two children’s books, some New York Times articles, one non-fiction book, and several screen plays. His first screenplay was based on his own book, Strangers When We Meet (1958, by Evan Hunter). He is far more well known, however, for writing the screenplay for The Birds directed and produced in 1963 by Alfred Hitchcock (based on a story by Daphne DuMaurier). His one non-fiction book was a memoir based on his experience working with Hitchcock.

Today, his crime novels, re-issued, are making a comeback. There’s an observation made well into Cut Me In that sums it all up, in style: “There had been a lot of blood, so far. Too much….”

As you read Cut Me In, or any of his crime and detective novels, be prepared ― for the blood, that is; along with gutsy crime scenes, arrogant cops, sexy women and the rough language of the hard boiled crime genre.