Koko the Mighty by Kieran Shea 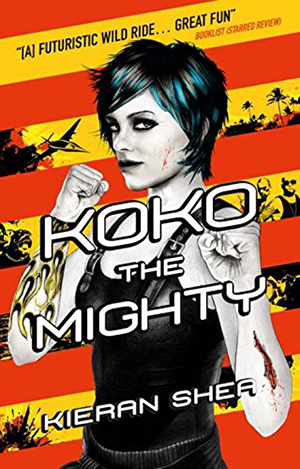 Koko the Mighty takes place shortly after the end to the insane rollercoaster that was Koko Takes a Holiday. Koko Martstellar thought she and her boyfriend, Jedidiah Flynn, were in the clear after their narrow escape from bounty agents sent after them by her crazy boss. Unfortunately, Jackie Wire survived and is determined to collect on the Ultimate Sanction elimination warrant – a bounty that will never expire, not until Koko is terminated. Koko and Flynn run to the Northern America prohib coat, but are badly injured upon arrival. When rescued by a society seemingly composed of good Samaritans, Koko is suspicious, but at their mercy. Soon Flynn’s strange behavior leads Koko to discover a secret and unethical experiment. Before she can whisk him away the society is attacked by pre-civs – disease ridden people left behind on earth when the majority of humanity migrated to space – and the attack is led by Wire.

Koko’s adventures continue to be fast paced and full of danger. This time around, the characters travel earthside, giving readers a glimpse at what has happened to our planet in the last five hundred years. Koko remains a kickass, foul mouthed warrior, whose past has a nasty habit of following her around. Despite a brief summary for the first book, readers will want to have read Koko Takes a Holiday before diving into this one. While no sequel is confirmed as of this time, the ending to Koko the Mighty will make readers hope for a follow-up, and soon!