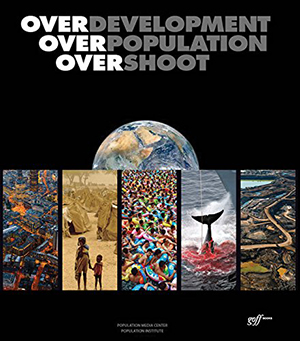 Overdevelopment, Overpopulation, Overshoot is not an easy book to read. This is a large coffee table book of photography that focuses on the effects of humans on Earth. As the title suggests, it focuses on the problems caused by our excessive numbers.

The images are both shocking and disturbing, and highlight many problems that the general public is more than happy to ignore on a day to day basis: trash, pollution, deforestation, smog blanketing the skylines of cities, and damage caused by mining. There are photographs of starving children in line waiting for small handouts of food, children bathing in polluted water, and sad looking young girls about to be married off to men three or four times their age. Some images show livestock searching for food in fields and roads completely covered by trash, and people struggling to survive in refugee camps with appalling conditions. Even seemingly innocent pictures of crowds attending festivals in the streets are nearly suffocating for the sheer numbers of people crammed into the tiny spaces.

Other pictures focus on humanity’s more active and conscious destruction, such as photographs of poached elephants. There are several disturbing images of cruel and wasteful fishing practices where sharks are harvested for their fins, and the rest of the still living shark is tossed back into the ocean. Oil spills and the damage they cause are also prominently featured.

This is not an upbeat book, and the images chosen are clearly going for shock value. However, as an education tool, the book somewhat misses the mark. The book is filled with single sentence texts that are laid over the images, and the tone is quite preachy and heavy handed. The blocks of overlaid text detract from the power of the images themselves. The information about the individual photographs – where they were taken and the photographer’s name – are listed in the very back, which means that readers would be required to flip back and forth when reading. The images themselves are only loosely organized and mostly appear to have been thrown in at random. The book could have strongly benefited from a different layout and a much tighter organization of the actual images.

Despite how disturbing and disheartening most of these images are, it is important that people see these images. Mainstream news and media glosses over many of these issues, and although we may hear about it, we prefer to let the bad things be drowned out by cute cat videos on the internet, and celebrity gossip. While we may prefer to not see the worst of the damage we are causing, we have to see it in order to begin to make changes.