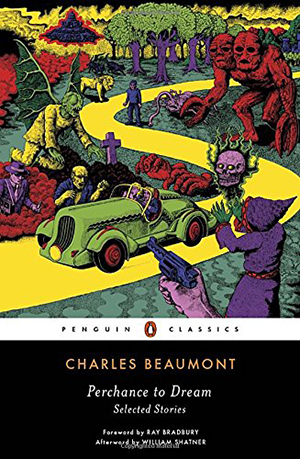 Few writers seem to have so much joy in the craft of storytelling as Charles Beaumont; his enthusiasm clings to the page like sweat on a hyperhidrotic hand. A close friend of the incomparable Ray Bradbury, Beaumont was challenged by his literary friend to write a story a week—and for the rest of his life (cut tragically short by a bizarre illness strangely appropriate to a writer of bizarre tales) it appears he did so. Contained within this new and entertaining collection, Perchance to Dream, is an assortment of bold and fascinating tales penned by this prolific and imaginative author. In this collection are warlocks caught in a supernatural hot potato match with a deadly curse, men who fall desperately (and intimately) in love with automobiles, a neurotic vampire with a persecution complex, and a girl who breaks the mores of a futuristic society by deciding not to receive cosmetic surgery. No subject was deemed too low or too high for Beaumont to tackle and this democratic approach to storytelling is a part of his appeal; there is no pretension in his work—only the love of the story! Reading this collection is utterly beautiful because Beaumont’s passion inhabits every page and provides his readers with respite from the storm of ponderous plots and humdrum characters. Stories are not his art—they are his life! Reading Beaumont is like waking up in a magnificent Wonderland where there is no limit to the imagination. While most writers are left only to gaze from behind the gates into this magic land, Beaumont frolics its meandering paths, never taking a moment for granted.

Every story in this collection is memorable. I am currently looking through the table of contents and cannot decide which stories to discuss in regards to their literary merits because I want to relate to you about them all. Every one of them made me stop and go “huh, isn’t that interesting?” But I suppose I must choose some stories to write about, maybe those most likely to provoke salivation for this literary tapas.

Perhaps my favorite is “The Monster Show,” in which the Earth is brought to its knees by the premiere of a television spectacle so bombastically hyped that the entire population of Earth tunes in to see it. This would typically be a major coup for any network, but The Big Man in charge is really using the show as a cover for a much more nefarious plot, preying upon the human weakness for spectacle in order to accomplish his task, commenting memorably in the end that “it was easy.”

But not all of Beaumont’s stories are out-there science fiction like his fame as a writer of Twilight Zone episodes would suggest. Some of his stories can be heartbreaking and touching, equal to any work of literature. In “The Music of the Yellow Brass” an inexperienced matador, Juan Galvez, is hired to go into the arena so that he can be gored. Upon learning about the actual intention of the match, he decides to proceed anyway even though it could mean his death. And he calls it his “good fortune” as he enters the arena! We are left to ponder this poignant ending. What could entice Juan Galvez to enter the arena at the cost of his life? Fame? Or just one glorious moment where he can be like the matadors he admires. Maybe there is no better death for a matador—a Cleobis and Biton scenario. There is no answer provided, but despite the open interpretation, this story resonates deep within the soul. There is a primal desire for life, for something lasting; nevertheless, within also resides a craving to sacrifice all permanence, to annihilate the self, in order to experience a single, perfect moment. I was struck by the profundity of Beaumont’s ending and the question he raises in regards to humanity’s existential values.

And some stories are downright horrifying. “The New People” move into a close-knit neighborhood and are warmly welcomed by all. But perhaps a little too warmly. At a “welcome to the neighborhood” party, Hank Prentice is warned by one neighbor, Matthew Dystal, to leave—immediately. But this is preposterous; just the ramblings of a drunk neighbor. Then later that evening Dystal tells Hank about what these neighbors do: to stave off the boredom of suburbia, the neighbors formed a group—innocent enough at first—playing games and reenacting scenes from books. These activities could only ward off boredom for so long, however, forcing the group to get their kicks with more ambitious activities from having swingers parties to armed robbery to finally murder. Hank remains skeptical of the whole scenario until Dystal secretly takes him to watch a ritual in which the group tries to raise Satan with a human sacrifice—which the Prentices themselves ultimately are able to provide. It is a wonderfully chilling tale, the tension growing until the cord breaks and the audience is left with the horrible truth of the situation that spells certain doom for the Prentice family.

Like I said, I could go on. But instead, you should just go out and pick up this collection and read it for yourself. It was an absolute pleasure to read it. Some books you can pick up and read and forget about the next day. Not this one. Every one of Beaumont’s stories is indelibly marked on my brain. That, more than anything in my opinion, is a sure sign of literary greatness.