The Bishop Wears No Drawers by Michael Barrington 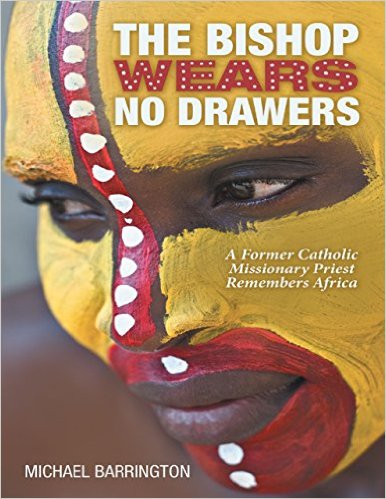 Michael Barrington writes honestly and openly in this memoir about his time as a Catholic missionary priest in Nigeria. His initial bumpy introduction to Nigerian customs is just the beginning. He takes readers through his life as a priest, living in the African bush. Not only does Barrington have to figure out how to navigate the politics of a diocese, but also adjust to life living in the bush as the only priest in a large rural parish. He recounts his daily life administering to those in need and traveling through the bush on safari, all the while dealing with the trials of living in a country torn apart by war.

Barrington is unapologetic in his portrayal of missionary life. He describes a world of drinking, swearing priests who struggle with the solitude of living in the bush. He also touches on Vatican II (the Second Vatican Council), and he is open and honest about encountering pedophilia firsthand – nothing is off-limits. As Barrington watches his fellow priests sometimes struggle with their circumstances, he too becomes lost and ultimately struggles to find himself again.

The reader will be captivated from the beginning. Not many people get such a glimpse into missionary life, or the life of a priest. He handles controversial issues with grace and careful introspection: how to be a missionary without westernizing the culture, what is right and what is wrong about imposing your values, the differences and struggles between priests adhering to the old doctrine, and those supporting the new doctrine, just to name a few. It is a little hard sometimes to keep up with Barrington. There are a lot of people who are introduced briefly and it can be difficult to remember who is who. He often moves fast, time passing quickly from paragraph to paragraph. The transitions in the book could have been improved, as without even spaces between sections in a chapter it is jarring to figure out what he is writing about next (there is a second edition that addresses the transition issues and will be released soon). He seems worried about taking too much space to describe things – something he needn’t be concerned about, as a little more fleshing out would be a good thing. It may also have been a good idea to include a map, as Barrington moves from place to place quite a bit. Aside from some of these editorial issues, this is a wonderfully interesting memoir from a fresh voice.