The Business by Stephanie Lenox 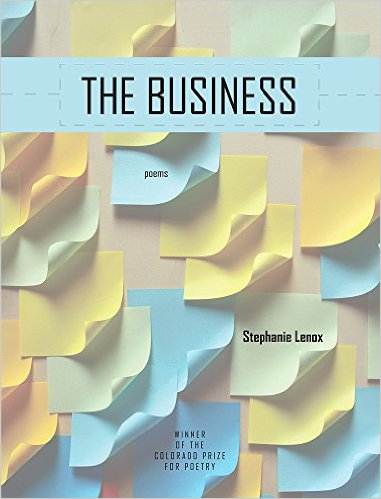 The Business, by Stephanie Lenox, is a book of poetry with the primary focus of being employed in an office work environment. Taken from the poet’s personal experiences, this book contains five sections of poetry. Three of those sections contain eleven to thirteen poems apiece, while two sections only contain one poem several pages long. Most of Lenox’s poems resemble one another: short, non-rhyming stanzas that are one to two pages in length. There is some variance – a handful of poems have no line breaks and the poem “Employees Must Wash Hands” rhymes – but for the most part the poems all follow a similar structure.

There are two presiding themes throughout The Business. The most obvious theme is that of working in an office setting and the unhappiness that may follow. Lenox tackles these subjects through her own experiences, working in nods to her day-to-day routines and even sliding in multiple references to irksome qualities of fellow coworkers (in more than one poem Lenox mentions the annoyance of the strong smell of tuna wafting from the office kitchen). Her longer poems, such as “Rejoice in the Petty Thievery of Office Supplies” and “Teamwork,” are often set to a definite format. These two, as well as “Employees Must Wash Hands,” are repetitive in nature, starting each line off with “Let’s…” or “They must…” There are a handful of poems that act as odes to ordinary objects around an office one would not think much about: “The Pencil,” “Elegy for a Briefcase,” “Fax Machines Are Passing From Our Lives,” etc. A lot of these odes, as well as some other poems, bring a bit of silliness to the table – although, more often than not, Lenox’s poetry deals with the depth and frustration of office life.

The second prominent theme in The Business is that of mythology – both Greek and biblical. The names of all five sections of the book – “Prologue,” “Parode,” “Episodes,” “Stasimon,” and “Exode” – are references to Greek theater in and of themselves. The beginning and closing parallel pieces – “Aubade for the First Week” and “Aubade for the Second Week” – mention Adam and Eve, drawing imagery to the nakedness and shame of humanity. The last poem even ends with the line “We are not the stuff of mythology.” “The Ark” contains direct references to Noah, and “Employee Manual for Mortals” draws allusions to Orpheus. Two of her pieces even speak directly on the subject of mythology. “On Mythology” speaks of how often myths start with a slight, and “Interview for Position of Mythological Hero” combines the themes of office work and mythology, and contains the beautiful line “This is not just a paycheck. You must think of this / as an investment. Give us your life, / and we will return, in kind, immortal glory.”

While her poems are not shrouded in thick, poetic language, this does not hurt the poet’s work in the slightest. On the contrary, Lenox has constructed a book of poetry that anyone who has ever worked in an office can heavily relate with. An example of a relatable piece, the poem “Teamwork” highlights the false cheeriness of office life and what really lies under it all. The poem starts with such go-getter lines as “Let’s put in 110%” and “Let’s be happy that the situation isn’t worse” and closer to the end contains lines such as “Let’s not get upset about this. It was a matter of time.” Lenox is also able to take benign materials (often office supplies) and pry hefty metaphors from them. “The Jam” uses a copy machine as a metaphor for despair, and “On Being Let Go” compares being fired to a tree shedding its leaves at winter. The meanings of the poems are straightforward, which is a nice change of pace. Lenox has taken the 9-to-5 routine many of us dread and drag ourselves through daily and put a poetic spin on the experience. Not a bad way to recycle gossip from around the water cooler.