The Pawnbroker by Edward Lewis Wallant 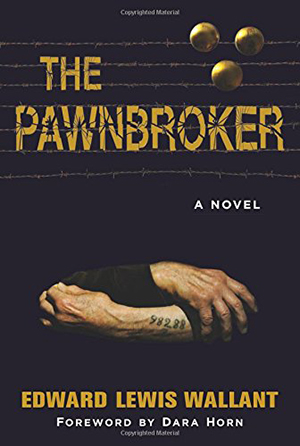 Edward Lewis Wallant’s The Pawnbroker is a dark, dreary tale of human suffering that somehow manages to maintain a sense, however slight, of hope – a weak flicker of light at the end of the tunnel. The 1961 novel, seminal in the genre of Holocaust fiction, tells the story of survivor Sol Nazerman who, as a result of the physical and emotional wounds he endured during World War II, shuffles listlessly through his daily life, running a pawnshop that’s actually an elaborate money-laundering operation, dealing with the hopeless and empty and hungry of Harlem, a variety of addicts and victims and people down on their luck who come into his shop to sell their — or their family’s — most precious wares for pitifully small sums of money. The novel also tells of Sol’s assistant, the aptly named Jesus Ortiz, a street smart youth with a plan for making it big in business who just can’t quite escape from his upbringing and the people by whom he’s surrounded.

The New York of Wallant’s book is populated by a cast of damaged characters, each, like most of us, harboring their own private pain, which we are able to glimpse through the novel’s sensitive, patient prose. But most characters don’t suffer the same as Sol, whose experiences in WWII are revealed via a series of flashbacks, usually coming to him in his restless sleep. This brings readers into the depths of the pain of a man who, in daily interaction, one is forced to realize is a particularly unsympathetic character. The true strength of The Pawnbroker, which some now view as overly symbolic and somewhat heavy-handed, is Wallant’s ability to humanize everyone, even the most unlikable characters, and to imbue them with a sense of reality that, for all of the ugliness of the world presented, doesn’t leave the reader cold.