The Present Immortality by Roof Alexander 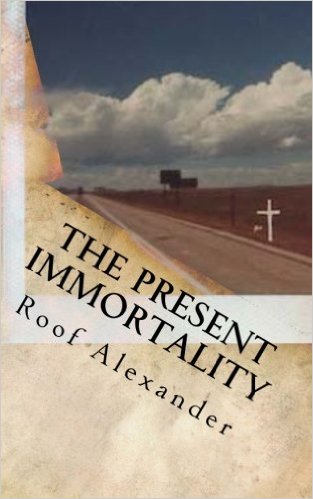 Books about existential road trips have been in circulation for many generations, from Homer’s Odyssey all the way down to On the Road, by Jack Kerouac. Set in the early era of technology in 1999, before cell phones and laptops, The Present Immortality, by Roof Alexander, is another rendering for this category. Ecc, short for Ecclesiastes, and his girlfriend Moll begin their road trip in San Francisco. As they embark in Ecc’s Bronco, they share a semi-spoken general understanding and agreement that they will only move forward, never backtracking. Each time they set out, their direction is random, often chosen by Ecc since he is the driver. Their travels take them from place to place, first through Nevada where they encounter locals while staying at sleazy motels and shooting pool while drinking in small town bars. Eventually, their trip takes them to Boulder, Colorado, and New Orleans as they shift their agreement to accommodate their return to places where they had once enjoyed being together.

The narrator’s voice in The Present Immortality switches freely between Ecc and Moll with little note of the change beyond extra space between paragraphs and a mid-page dash. Most scenes are reviewed from each character’s point of view. That forces the reader to look for subtle notices of narrative voice changes, such as the other character’s name or the gender pronoun for the other character. That subtlety occasionally interrupts the flow of the story, particularly if the reader is mistaken about the identity of the narrator.

Two significant issues rise to the surface of the narrative with regularity throughout the story: something Ecc feels growing inside his head, and an incident from Moll’s past that altered her life’s course. Both characters are self-absorbed as well as deeply connected to each other. These two issues keep the reader’s interest in finding resolution and questioning the reliability of each of the narrators.

The Present Immortality raises questions about the endurance and nature of relationships as well as expressing all the angst that goes into them. It’s an engaging read for those who enjoy the “road-trip-for-the-sake-of-the-journey” genre.