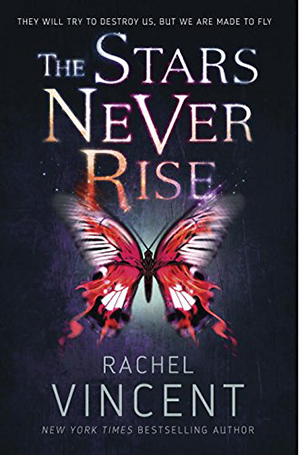 In the world of The Stars Never Rise humanity has learned the hard way that demons are real. These soul eating monsters have decimated mankind, and we have since learned that souls are finite. What is left of humanity has retreated to walled enclosures run by the Church, and are subjugated to its strict rules and even harsher punishments. Sixteen-year-old Nina Kane has her hands full providing for herself and her younger sister, but Mellie has just landed the both of them in serious trouble. Nina stumbles on a terrible secret, and realizes that the Church has been lying to people from the beginning. As a true exorcist Nina is now on the run from the Church’s thugs, and is thrust into a band of fellow teens – other exorcists on the run. They need each other to survive both the Church and the demon horde, but Nina will not leave without her sister!

This story is a great, fast paced, and fresh feeling take on a post-apocalyptic scenario. Nina is wonderfully easy to relate to, and comes across as both capable and yet very down to earth. The world in which The Stars Never Rise takes place is dark, and tangible. Author Rachel Vincent makes it easy for readers to imagine this new and horrifying take on the future.

The supporting characters are an interesting mix, and while they may at first come across as stereotypes – the strong, silent type, and the haughty punk that hates everyone – they quickly start to develop depth. Finn in particular is an incredibly different type of character. At first seeming to be the stereotypic pretty boy, his particular differences make for a complicated romance option for Nina. While some readers may feel that their emotional relationship moves way too quickly for only knowing each other for just a few days, Finn’s uniqueness keeps the romance from devolving into a complete mess.

This is also a Young Adult book for more mature readers. While many of the characters are between fifteen to nineteen years of age, the book touches on some very mature themes including, drug use, consensual sex (which occurs off-screen), sexual assault, torture (people are set on fire), and murder. Since humanity is also under the thumb of a violent religious cult that is somewhat based off of Christianity, some readers will find that offensive as well. All said, this is an easy book to get into, and most readers will find themselves tearing through it at a rapid pace. The Stars Never Rise is recommended for anyone who wants to get hooked on a new series and enjoys a darker world in their Young Adult novels.