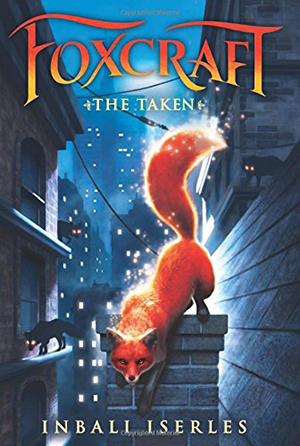 The Taken is the first book in the Foxcraft trilogy – a new series for middle grade readers. Isla and her brother Pirie are as close as two young fox cubs can be. Isla looks up to her brother, who though born only a few minutes before her is already a better hunter. Isla’s pastoral life is abruptly shattered when the Taken come to her den. She can sense that there is something horribly wrong with these foxes; they smell like cinders and smoke and have done something with Pirie and the rest of Isla’s family. Isla flees into the Great Snarl – the territory of the furless – and risks the dangers of the deathway, rife with manglers, and the snatchers. There she meets Siffrin, a fox sent by the Elders of the Wildlands who is looking for her brother. Isla doesn’t trust him, but it is dangerous for a young cub to be on her own….

The Taken is reminiscent of old classic children’s books that star animal protagonists, and comfortably fits in the family of Charlotte’s Webb, Redwall, and The Wind in the Willows. In this case, readers will have the chance to experience life through the eyes of a young fox. The world of The Taken is brilliantly constructed, with its own set of language and terminology of things as seen from the perspective of a fox. Humans are called furless and the cars they drive are called manglers – an unpleasant reminder that roadkill, a casual if sad fact of life to humans, is devastating to a fox and her family. The book allows readers to see our familiar world from a new and terrifying perspective: a small and fragile young fox.

The book is incredibly easy to fall into, and the new terminology that is introduced is done in a simple, organic fashion. Isla is endearing, and readers will find themselves gasping at her close calls, cheering at her accomplishments, and enjoy watching her learn and grow. The elements of magic in the narrative hearken back to the joy of reading fairy tales as a child. This is a perfect book for children, and older readers will find themselves captivated as well. The Taken is a thoroughly enjoyable start to a new series, and is well worth the read.