The Treasure of Malaga Cove by John Gillgren 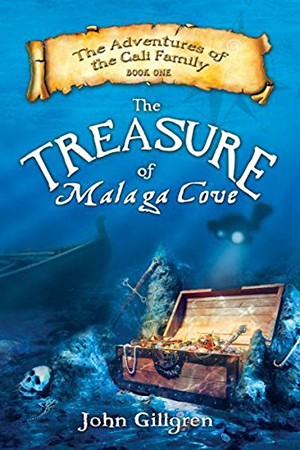 The Treasure of Malaga Cove by John Gillgren follows the story of the Cali family’s adventurous encounter with history. At only fourteen years old, Carmine Cali heads out on his first ever dive, wherein he saves a fellow diver’s life who claims to have witnessed a skull near the floor of Malaga Cove. Thirty-nine years pass and Carmine is now a married man. His wife, Elaine, and their children – Carmen, Caroline, and Carmine Jr. (Snail) – all share his love of diving and exploration. Even after all this time, Carmine is still haunted by the idea of the skull his fellow diver swore to have seen. When the family decides to dive in the Cove in search of the human remains, they’re set up for an adventure they never expected – one that soon ties them in with an important part of history.

This book is the first of Gillgren’s new series, The Adventures of the Cali Family. There is a strong focus on the history of piracy, exploration, and sea navigators. Malaga Covedraws heavily from the history of Sir Frances Drake during his time interfering with Spanish and Portuguese fleets. In particular, the book looks at the betrayal of Thomas Doughty, Drake’s co-commanding officer. Gillgren does bend history a bit in Doughty’s fate; instead of writing how Drake sentenced Doughty’s beheading, Drake puts his ex-accomplice on a dinghy with all the gold he had demanded and sends him out to sea to die. This was changed, presumably, for the sake of the story’s main plot – the rest of the historical facts seem fairly reliable. There is also a cliffhanger at the book’s end mentioning Ching I Sao, a famous female pirate, which sets the series up for its second part.

Malaga Cove feels like it is best suited for an audience of fifth or six graders. While Gillgren is a talented writer and weaves his nautical information into the story with great ease, the meat of the plot is hardly enough to keep grown adult readers appeased. However, the action, characters, and story seems perfect for any early middle school audience. There are plenty of characters for younger audiences to relate with, and the book is brimming with nautical history and facts. It also contains plenty of information about scuba diving, which may appeal to anyone with said interest. Not to mention there are many themes well-fitted for younger audiences: equal representations of gender, working together to solve problems, the importance of history, and a strong family who stands by each others’ sides.

It’s a fun adventure to be had for any child willing to crack open the spine; they may even learn a thing or two while they’re at it!