The Write Way to Get a Girlfriend by Alfred Taylor 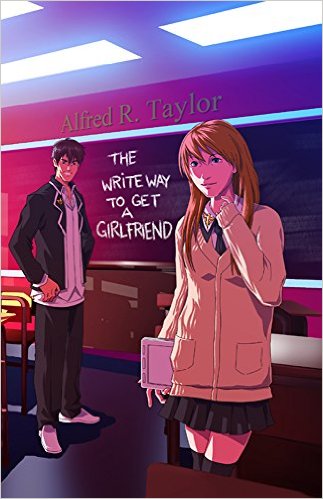 The Write Way to Get a Girlfriend, by Alfred Taylor, follows the lives of the students of Edgar Allen Poe High School. Juan Rivera has never been much of a writer; he’s a smart kid, but using language to his advantage has always evaded him. Juan’s used to English professor reading his essays aloud to classes as a “what not to do” example. Enter Kristen, the cute, new Japanese girl who is assigned to be Juan’s English tutor. When she overhears Juan’s so-called friends teasing him for his skills – or, rather, lack thereof – she wagers a bet: that Juan will take first place in the school’s essay-writing competition. Over the course of the year, Juan learns to deal with relationships, death, expressing government viewpoints, and a whole new understanding of the English language.

The reader should know upfront that this book has a very specific target audience. That audience? Teenagers struggling with their grades in English class.

The Write Way to Get a Girlfriend is chock full of well done examples of how to write a basic, structured, five-paragraph (or longer) essay for a class. Taylor works in study lessons between Juan and Kristen throughout the book, going over such things as comma splices, compound sentences, objects and subjects, fragments, active and passive phrases – the list really does go on. The book also looks into how to write a cover letter and resume for the first time, as well as how teenagers should approach an interview for any job. This is the key function of the book, no doubt: to help young people learn. Taylor does a wonderful job using his written text as a teaching mechanism. He weaves this knowledge into a story that young people might also find interesting.

As for the actual story, it lacks a bit in the sense of well-rounded, gripping characters, but again, that’s really not the point, is it? The plot is, however, a bit preachy at times. There are a lot of opinions voiced against cyber-bullying, shoplifting, and driving drunk. Of course, these are all bad things, but the delivery is super heavy-handed. There is also a whole subplot of Juan becoming involved with politics, which feels both unnecessary and far-fetched. There is a good lesson learned about how there’s more to life in high school than continual gossip and bullying, though there is an absurd overuse of words such at “haters” and “ratchet.” The book does also feel cheesy at times, especially when it comes to the romance – although seeing a female character assert the need for consent with her boyfriend was delightful, as that is rarely seen in YA novels.

Again, while the plot of The Write Way to Get a Girlfriend is a bit bland at times, that hardly matters. It is still a good vehicle for the author’s main purpose: to teach. This book is pleasantly filled with dozens upon dozens of examples of how to write proper sentences, structure a paragraph, and format a paper. There is even mention of how to study for the SATs and properly embed citations into an essay. Overall, a great read for any students looking to get a better grade in English class this year.