Tim Curious: A Murder Mystery of the American Revolution by Roddy Thorleifson 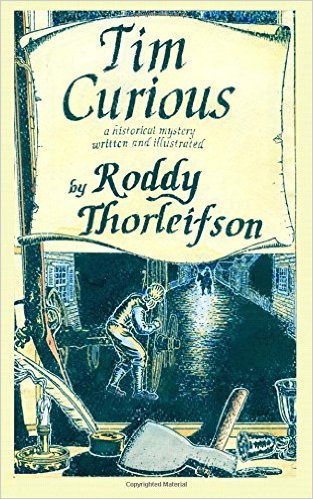 Tim Curious follows the trials and triumphs of young siblings Tim and Sadie during the American Revolution. Beautiful illustrations and historical tidbits following the chapters do assist in creating the appropriate atmosphere. However, Tim Curious is certainly a curiosity to me. Reading it through as a middle grade book, I found the catalytic theme of attempted sexual assault on a fourteen-year-old girl to be abrupt, a bit dark, and out of place. Viewed as young adult fiction, the prose and style seemed too juvenile to convincingly present the same concepts. I felt constantly torn between imagery and language.

The opening line of the first chapter is Sadie’s scream for help. By page two, Tim has come to her rescue, beaten her assailant, and been falsely accused of attempted robbery. The most confusing omission at this point is Sadie herself. She is present on page one and vanishes somewhere before page three. She is in the same street as her attacker, her brother, and several neighborhood boys who heard the commotion – and then she is not. I reread this chapter several times, wondering if it was I or the author who had lost sight of the center of the action. Sister Sadie conveniently exists to be attacked and just as conveniently disappears instead of joining the boys to stand up for her brother. Isn’t it customary for justice officials to ask the victim of an alleged crime what happened?

The overall narrative is rushed, jumbled, and dialogue-heavy. More and more plot points appear. There are attempts to gather evidence against Sadie’s attacker, the mysterious murder of a neighbor, Tim’s time spent in jail with the young man accused of the murder, political intrigue, etc.… Several new names are introduced to the cast of characters, but they each speak in similar long streams, with weakly defined personalities and appearances. Phrases like “an ordinary-looking man” tell the reader nothing, and solid blocks of dialogue do not alleviate the experience.

Tim Curious has atmosphere, direction, and ambition. It is also unfocused, unpolished, and incomplete. My strongest gut reaction to this story is that I want more of it! An adjusted opening that better sets up the characters, their basic relationships, and why readers should care about them. Tightened conversations, cleaning out what doesn’t drive the plot forward or help define a memorable cast. Most definitely, more description of characters, their surroundings, and eighteenth-century life in the colonies.

Whether the author chooses to aim for an elementary or a teen crowd, readers will want to know his story’s entire world.