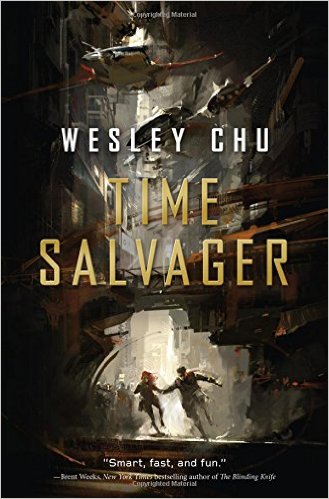 After centuries of warring, colonizing the solar system, inventing and losing technologies, and seeing all sorts of societies rise and fall, humanity is in a rough position. Earth is a place of filth and decay, and the only way humanity is able to sustain itself in the solar system is by jumping back to resource-rich times to steal materials and power sources for use in the present. The problem with this is that it requires highly trained operatives who are in short supply and either a little unstable to start with or made that way by the job – to make these jumps without disturbing their timeline, they have to go back to just before disasters strike, covering their tracks but incurring incredible levels of guilt over leaving the dying masses behind, on top of the “lag sickness” caused by time travel itself. Our protagonist, James, has had enough, and on the biggest job of his life he impulsively breaks the most important Time Law there is – he brings someone back to the present. In doing this, he makes fugitives of them both, creating a mess that might be humanity’s last hope.

This book is beautifully thought out, with a fun premise, incredible world-building, a compelling plot, and a cast of characters with motives as diverse as their backgrounds. While the first couple of chapters might be a little on the clunky and awkward side, the book is impossible to put down once things really get moving. Even the hard SF aspect of the novel is crafted so the average reader can eventually digest it, starting out strong for a foundational knowledge of the technology at hand and mellowing as the novel progresses. The only serious complaints one could make pertain to the occasional bout of cringe-worthy dialogue, instances of redundant or awkward narration, and a few editorial errors here and there. The story itself doesn’t quite go where it seems like it should at first, either, but by the end, it’s obvious that it went where it needed to go for the characters to properly develop and flourish.

The first book in a promising new trilogy, Time Salvager has been optioned by Paramount for a film, and its sequel, Time Siege, is set to hit shelves in 2016.