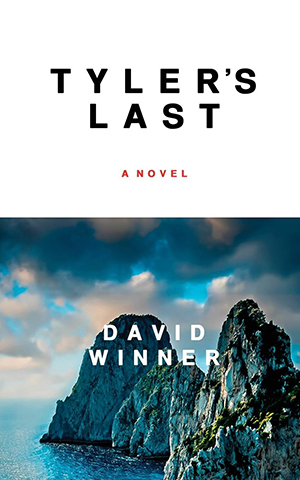 The mind of an author is truly amazing. To most authors, the characters they write about are alive within the world of their mind and created with such passion and understanding that telling their story becomes a genuine relationship. Tyler’s Last, written by David Winner, is a complex and intriguing story about Eve, an elderly author whose brief romance with a fan has turned into an obsession of lust and cravings. Their connection created such an impression that it left such a wound upon Eve’s heart and mind she has never recovered from. At the same time she is trying to complete the story of her ongoing book series that revolvs around her main character, Tyler.

Tyler has led an exciting life full of many alias’ (in fact Tyler is only his longest running alias and the character is actually named Johnny), participated in theft, murder, and Ponzi schemes – which left him nearly broke – and feeling aimless at an older age. His wife has run off to Africa with her female lover, and he is indebted to a twisted criminal who sends him on an errand across the ocean. As if this wasn’t leaving readers on the edge of their seats enough, a man Tyler thought he had killed years ago seems to have found him and has come to seek his own justice. Eve’s sanity is tied to the desperation of Tyler.

While Tyler’s Last goes between scenes of Eve and her character Tyler, Tyler’s Last is written so that it is easy to follow and easy to feel connected to each character and not lose track of the events between. Winner writes with a blunt style that keeps the story fast paced, brutal, and real, while writing enough detail about each character to truly bring them to life. Tyler’s Last won’t be the last novel from Winner as he surely is capable of creating multiple stories – each unique and exciting.