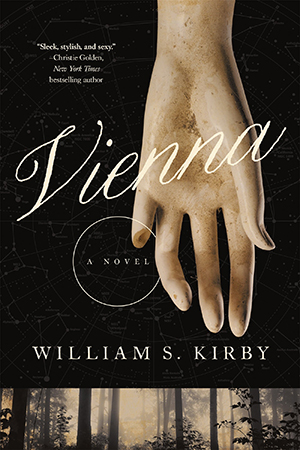 Vienna, by William S. Kirby, is a unique and fascinating novel, a murder mystery presumably written in the style of Sherlock Holmes – except that the sleuthing couple in this story are two women who are about as unlike Holmes and Watson as can be imagined. One is an outgoing, sexy fashion model named Justine, and the other is her lover, Vienna, an exceedingly shy, autistic savant. Vienna remains the center of attention as we follow Justine’s very public career, which takes the couple to Europe’s famous cities on various photo shoots. Each photo shoot includes a manikin as a prop with which Justine is paired for modeling. Some puzzling secrets and a series of murders are associated with those manikins, and ultimately with Justine’s career and Vienna’s strange way of seeing the world.

The plot rolls back and forth between the modeling, the travel, the love affair, and various attempts to sort out and solve the interwoven mysteries. It is fundamentally a love story and very much an adult novel, but one in which the intimate scenes are more smoothly suggestive than crudely descriptive, written with both sensual and sensitive acuity. It all adds up to an intriguingly complex story.

Part of the intrigue focuses on Vienna’s reactions to the geometric patterns she sees on the landscape and along the urban streets. Her mind is also cluttered with a multitude of historical facts that she dredges up periodically to help solve some conundrum or other. At times it threatens to overwhelm her, and the story.

Just as Vienna occasionally loses her way, it is easy to get lost in this novel, so the reader is advised to keep an eye on the action, both overt and subtle, in places line-by-line, in order to keep everything clear and straight.

Besides the two women around whom the story revolves, there are also several men in their lives who are closely associated with the murders and the manikin mysteries. If we say much more about them and their raison d’être, however, too much of the plot will be revealed. You’ll have to read it.

Throughout the story, we are privy to the ups and downs of Vienna’s often-tempestuous relationship with Justine. As it proceeds, we learn a great deal about her autistic issues and how she copes, or not. Occasionally her confusions with life and her frustrations with Justine boil over. For example, at one point Vienna tells Justine:

“You see how I interact with the world, and to you it makes no sense. So you see one mistake after another, and you’re embarrassed for me. You see me cry like a child and you twist love into the worst of crimes.”

Vienna held her finger to Justine’s lips—an exact copy of Justine’s motion for silence. “A string of genes that almost worked.” She considered this. “Or worked too well. I see things instantly that you might never see.” She smiled at this new thought…”

That particular snippet of conversation is one of the few places in the novel where we can detect a bit of Dr Watson-like insight being applied to Holmes-like puzzlement. But other than that, and despite the premise that this mystery novel somehow mimics Sherlock Holmes’ style, we see little similarity.

A bit more of the back and forth between the lovers begins, here, with Vienna speaking:

“I really hate you, sometimes.”

“It doesn’t bother you?”

“Hate is not exclusive of love. When you get bored, then it will be time to worry.”

On another occasion, after some unsettling turmoil and reconciliation between them while traveling across Europe to yet another photo shoot, we read:

Vienna had what she always wanted [a close, loving relationship] only now she didn’t want it so much anymore. She was always making mistakes or getting lost in Justine’s words. Worse, there was the endless geometry of so many new places. Shapes twisting inside the compulsive topology of her mind. She imagined the chain anchoring her to safe places fast playing out against the onslaught of Hurricane Justine.

A trip to Iceland provides a critical turning point in the story, but some aspects of it threaten to overwhelm Vienna’s autistic sensitivities:

Reykjavik was built in classic Lego, red and blue triangles over white squares. A rocket ship cathedral claimed the city’s highest hill, flanked by walls of descending stone hexagons. Justine saw it through Vienna’s eyes: trying to overlay the walls to see if they matched. Fearful symmetry.

Justine is concerned that “The rigid geometry would be murder on Vienna.”

Eventually, the knots that have tied this complicated murder mystery together unravel to their conclusion.