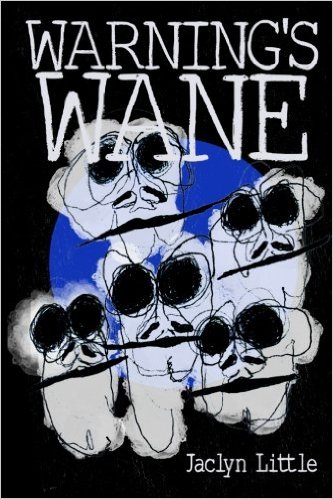 Touching is prohibited. Touching leads to Disappearance. This is the foremost rule of Praxia Island.

This rule is the backbone of Jaclyn Little’s new novel, Warning’s Wane. It is a conceit that requires a lot of suspended disbelief on the part of the reader – Little coyly acknowledges within the narrative several problematic elements with this premise, such as how a person changes a diaper without touching – but is nevertheless an intriguing exploration of a society that more or less functions completely within this rule, and how a prolonged period of abstinence from touch affects the human psyche.

The story follows Paul Danniers and his wife, Colleen, who move to Praxia to be with Colleen’s mother, who is soon to die and has chosen Praxia to be her final resting place. Only after they move to the island do they discover the list of unusual laws they are forced to live by, enforced by the mysterious announcer, a figure part mayor, part sheriff, and part bogeyman. They also discover that while Praxia might be hard to get to, it’s even harder to leave.

Warning’s Wane is told in the first person from the perspective of Paul Danniers. Paul is an instantly dislikable man. He has a pathological inability to communicate and creates a lot of his own problems. He is patronizing, insecure, and cowardly. Much of the narrative is an internal paranoid rant on the part of Paul, but it is paranoia supported by events around him, creating a cyclical dissolution and reconstitution of his character. It is an uncomfortable head to live in for the entirety of a novel, but can at times be fascinating, and the quality of Little’s writing helps to alleviate the repetitive and insular nature of Paul’s thoughts.

The voice of Paul is so intense, he could really use a foil with an equally big personality to stand up to him, but here the novel is lacking. Colleen should operate as his foil, but for much of the book she is a limp character. She is shown as either hostile or distant, and seems the only one on the island to not notice the supernatural malevolence that pervades everything. Near the end of the book she becomes a much more interesting character, making one wonder what the novel would have been like if told from her perspective instead of Paul’s.

About halfway through the novel, personalities of the townspeople begin to emerge, giving the reader respite from Paul’s brooding. The townspeople are well written, complicated characters, and may well elicit more sympathy from the reader than do Paul or Colleen. It is the puzzle of Praxia Island, though, that will keep the reader involved.

It is unfortunate that many potential readers will not feel welcome in the novel, as it is strongly heteronormative. Men are men, women are women. It is shameful for a man to cry. Men do not love their children as much as women do. A woman’s greatest purpose is to be a mother. The only acknowledgment of the reality of LGBTQ individuals is a single jeering exchange between straight men at a barbecue.