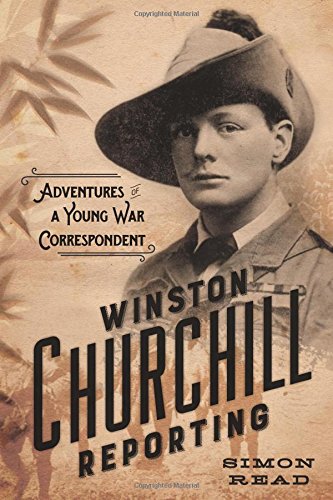 Winston Churchill Reporting: Adventures of a Young War Correspondent by Simon Read, is a biography focusing on the portion of Churchill’s life as he was trying to establish himself as a potential force in the politics of Great Britain and possibly the world. Only about 20 pages of the 250 page book are devoted to his birth, youth to 20 years of age, and to the beginnings of his political career in 1900. The remainder of the book is focused from 1895 when he joined the 4th Queen’s Own Hussars to the end of 1900 when he returned to England after completing his tour as a war correspondent. In those 5 years he traveled to, saw and experienced war in Cuba, the British India – Afghanistan border, the Sudan, and in the Second Boer War of South Africa. During these actions he functioned as a war correspondent but did see action in India, the Sudan, and South Africa. These activities not only resulted in reporting the actions to England but he wrote books about the last three, with the result of gaining significant fame in England.

This book appears to be one of the only books (out of nearly 700 books about Churchill) dedicated to that period of his life. Rather than a general overview of his experiences, it is a detailed recounting of the events using his own writings as well as a plethora of contemporaneous sources of those individuals who were also present. The writing brings to life what he experienced and his behavior. He was a man seemingly with little fear and it was very fortunate he lived to write about it. This book provides the reader with a sense of the core of this man and of the impact these events had upon him.