An Apprentice to Elves by Elizabeth Bear and Sarah Monette 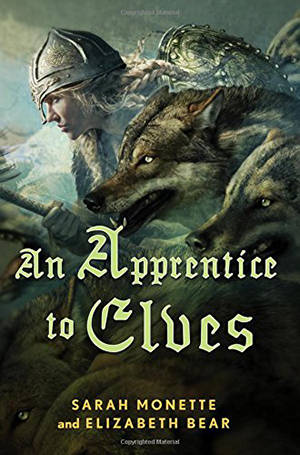 Till she was seven years old, Alfgyfa grew up the playmate of wolves. She ran with them in the woods, as one of the pack. She spoke with them in words of image and scent and sound. But women are not allowed to bond with wolves, because wolves are warriors, and in the cold north women are needed to birth children. And Alfgyfa already has a fate, arranged by her father; to be an apprentice to the svartalfar, the black elves of the earth. Alfgyfa will learn to be a Master Smith, and in doing so strengthen the bonds of allegiance between two peoples who can sometimes barely tolerate one another.

Alfgyfa is definitely the star of the novel, though the story is told from many points of view. Alfgyfa’s journey is so compelling, however, that the stories of the other characters may not quite grab the reader’s attention in the same way. While necessary for Alfgyfa’s story to be complete, the danger of the invading army is subsumed, becoming a catalyst for Alfgyfa’s transformation, rather than the focal point of the novel. The end of the novel, however, has all the heartbreak, tension, and elation that could be wanted.

Full of mythology and history, An Apprentice to Elves fully absorbs the reader and transports them to another world, a could-be world of Earth where men, magic, wolves, and elves live side by side. The names are inspired by Norse folklore, so for those unused to Scandinavian languages, pronouncing the names can be a bit of a hiccup; yet there is a musicality to the names that alleviates the frustration of having to slow down to sound them out.

That this book may be the last in store for Alfgyfa is a travesty; she is a remarkable character who needs her own trilogy, so she can fully develop her potential as a new legend, in the vein of Brunhild, Skuld, or Hervor. An Apprentice to Elves is a must read for anyone who loves Norse mythology, and a great addition to any old-world fantasy lover’s collection.